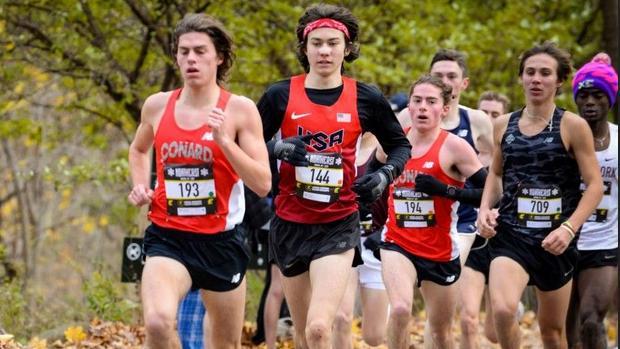 In 2017, CT got one guy to Foot Locker Nationals, and in 2018 it was two, then in 2019 three. After a one-year hiatus for an event now called the Eastbay Cross Country Championships, four CT guys are headed on to Nationals in San Diego after the state's generally dominating performance in the boys Championship race. And for the first time since Alex Ostberg captured the 2014 race with a 15:17.8 time (199.07 speed rating), a CT guy came in 1st as Conard's Gavin Sherry posted a new meet record time of 15:05.8 (200.07 SR) on a day when ideal conditions including a stiff breeze from the north pushed the runners home.

Joining Sherry for a repeat ride west will be Manchester's Aidan Puffer who finished 6th (one place up from 2019), along with newcomers Luke Anthony of East Lyme in 8th and Michael Bohlke of Newington, who took the final 10th qualifying spot comfortably. Anthony got a season's best speed rating of 192.57, while Puffer at 193.13 and Bohlke at 189.77 were close to their tops. Sherry pushed over the 200 mark for the first time this season and would have soared to the top of the national listings except that the top trio from Newbury Park CA had big days at their state championship meet on Saturday.

A group of other CT guys who finished in the top 70 of the Boys Championship included Conard's Callum Sherry in 43rd after a first half that put him up among the leaders, teammate Sean Barkasy in 44th, Lewis Mills' Justin Cascio in 56th, Suffield's Griffin Mandirola in 62nd, and Avon's Carver Morgan in 66th.

The highest flyers among the girls in the Championship race were Choate Rosemary Hall's Gabrielle White in 19th, Ridgefield's Katherine Rector in 36th, Cheshire's Alexa Ciccone in 56th, Trumbull's Kali Holden in 62nd, and Ridgefield's Deirdre Flanagan in 67th. Promising some future strong results, presumably like her brother for Lewis Mills, Lindsey Cascio finished 2nd in the Girls 13-14 results.

Also going on on Saturday was a meet that we'll refer to as the Northeast Team Regionals (no National championship meet follows) at Bowdoin Park in Fishkill NY. Among the CT boys' teams, the best finishes were Hall in 4th, Ridgefield in 5th, and Xavier in 8th. Xavier's Eamon Burke finished 2nd, Hall's Walker Beverly was 8th, and Ridgefield's Steven Hergenrother was 14th.