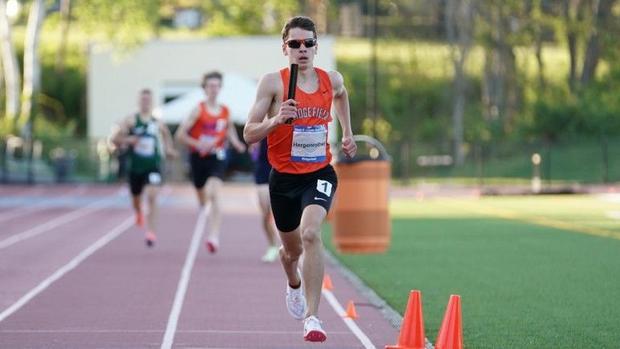 The Tigers had a bit of a feast time on Thursday on the first day (distance medley relay, basically) at the Loucks Games in White Plains NY. Both Ridgefield teams in the elite East Coast DMR races lived up to their seedings and came away with CT #1 times. The guys got the added bonus of standing on the top spot on the awards podium in front of the big Tiger insignia.

The Tiger guys sported the number 1 hip sticker as the top seed, and along with another orange-clad familiar rival in Danbury, they were also facing off against strong New England teams from Classical RI and Marshfield MA and NY's now 3rd ranked team Columbia. For awhile it was CT showdown as big legs in the 1200m and 400m from the Tigers' Ben Mickool and Ethan Walls got them a two second lead over Danbury's Steven Confesor-Chable and Kyle Thomas, but the Hatters' Christopher Twombley crushed a 1:58.19 on the third 800m leg to give Danbury a three-second lead over Ridgefield and Ryan Donovan. Ridgefield's Steven Hergenrother grabbed the lead back from Danbury's Devon Rosemark with 500 meters to go and then after being challenged by Columbia on the final lap, he broke away with 200 meters to go to complete a 4:20.58 leg for the CT-best 10:27.21 time. Rosemark came back strongly in the end to almost pass Columbia as Danbury finished 3rd at a CT #2 time of 10:31.69.

The Tigers' girls were facing a steep task in the East Coast DMR as they were matched against the top team in the nation, the Saratoga Blue Streaks, who won at the Penn Relays with an 11:43.26 mark in a race where Ridgefield was 9th. Saratoga did indeed run far ahead of the field at 11:55.00, but the Ridgefield foursome of Georgia Keller, Elaine Matthews, Grace Hooker, and Katherine Rector put together splits of 3:47.50, 1:01.33, 2:19.52, and 5:01.96 for a CT-best 12:10.29 that beat their Penn Relays time by four seconds. The Trumbull team of Katie Marchand, Vanessa Maignan, Evelyn Marchand, and Kali Holden compiled a strong 12:19.74 time for 3rd and a CT #2.

Other action at Loucks on Thursday centered on Frosh-Soph races and the Open DMRs. Top results for CT in the F-S races came from the girls side with New Fairfield earning a 5th in the DMR at 13:39.44 and Ridgefield taking a 6th in the 4x400m at 4:22.72, with Convent of the Sacred Heart-Greenwich close behind in 7th at 4:22.81 and Greenwich 8th at 4:24.04.

In the Open DMR, three CT teams placed in the top 10 and Avon's team of Jevonte Eaves, Isaiah Adams, Jack O'Donnell and Carver Morgan were the champs at a CT #4 time of 10:39.41. Haddam-Killingworth's squad of Kevin Cavrell, Caleb Freeman, Andrew Hedges, and Alex Lara was 3rd at 10.56.29, and Ridgefield's Open A team of Henri Vieltojarvi, Cormac Griffith, Isaac Graber, and Liam Edson was 9th in 11:08.96. Immaculate was tops for the girls CT Open DMR teams as a squad of Kayla Ondy, Isabel Taiman, Lauren Manning, and Keelin Bremner was 2nd at 12:32.72, and Ridgefield's Open A team was 5th at 12:52.41 behind Regan McGrath, Maya Rubio, Elizabeth Buonocore, and Madison Mueller.

Friday's action at Loucks should be spectacular with the 200m, 800m, and 3200m being run on the track, the pentathlon getting its high jump and hurdles in, and the field area hosting the shot put and long jump. People of great wisdom and foresight will either be cheering at the White Plains track, watching the action on MileSplit Live, or best of all, competing in the Loucks' action.

Cheers to all on a fantastically fun Friday.