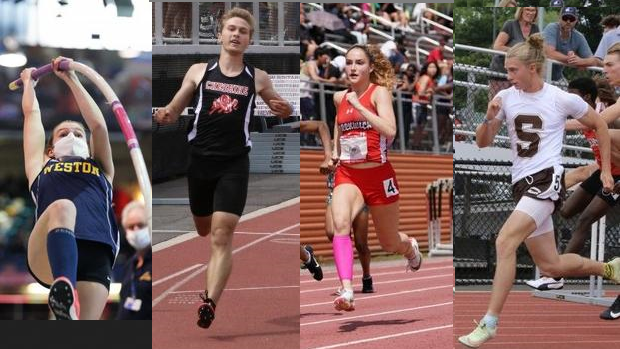 The Class of 2023 juniors this year won four of the CIAC Open's thirty individual championships, but next year as the older and wiser and stronger senior class, they should win a lot more.

Along with Open champs Colin Brown of Cheshire in the 100m, Joshua Mooney of Stonington in the 110m hurdles, Ellison Weiner of Weston in the pole vault, and Shaelyn Murphy of Maloney in the high jump, there were many juniors who were bested only by seniors, including Samuel Sandler of Hall in the 400m, New England 110H champ Michael Johnson of Lewis Mills in the 300m hurdles, Avery Cipcic of Suffield in the high jump, Christopher Hergott of Hamden in the long jump, Treshawn Blair of Bristol Central in the triple jump, Lucas Williams of Ridgefield and Nikita Nicholas of Nonnewaug in the pole vault, Samuel Meleshenko of South Windsor in the discus, Joshua Mooney again in the javelin, Quincy Davis of Windsor in the shot put, Kaitlyn Fay of Greenwich in the 100m, Francine Stevens of Staples in the 400m, Audrey Kirkutis of Conard in the long jump, Laniyah Henderson of Bloomfield in the triple jump, Gabriela DeFelice of New Canaan in the shot put and discus, and Alice Stettinger of East Haven in the javelin. Many of these and other top athletes also have a few other events than the ones named to excel in next year.

The top 50 junior performances in each of the standard individual events plus the mile are presented on the following two pages.