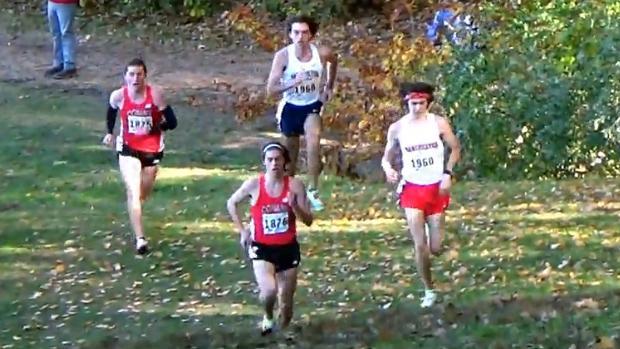 2021 was arguably the best year at least in recent times for the CT guys in XC. A foursome of Gavin Sherry, Aidan Puffer, Luke Anthony, and Michael Bohlke are headed out to San Diego for the Eastbay Championships (succeeding Foot Locker) to compete among 40 of the top runners in the nation. Two other CT guys also put up really big numbers during the season as Callum Sherry has the 33rd best speed-rated marks from his 2nd place at the CIAC Open and Eamon Burke had a strong SR for his 2nd at the Northeast Regional meet.

So the question is, how does this stellar group of CT guys compare to the other 49 states' best runners? It's an interesting question, but if you are stuck back in the Neolothic Age with a mindset that all 5K times are created equal, then you might claim that runners from CT and the rest of the Northeast who run on challenging hilly courses lag far behind runners from other parts of the nation who have flat hard packed speedways to put down marks in the low 14s. Clearly, that is not the right answer.

Fortunately since the creation of speed ratings for XC two decades ago for the non-troglodytes of the world, a good method for comparing performances on different courses and different conditions has become widely accepted as the standard for the sport. Thus Aidan Puffer's 16:06 on the tough Thetford VT course for 2nd at the NE Championship has a better SR (23rd in the US) than the 14:30 posted by the CO guy in 15th place (25th in the US) at the recent speed-burner RunningLane Championship. And on a national basis, CT's prowess can be compared to the rest of the nation with real numbers.

Though the brute-5K exponents are likely aghast at such number crunching heresies, the SR train continues to roll on. And the next stop is the Virtual States Speed Rated Championship, where each state gets to pit their top guys against the other states in the ultimate Race of Champions. The top three squads get on the VSSRC podium, and obviously this article would not have been written if the Nutmeggers' contingent hadn't done very well. The results from the Eastbay Championship will definitely affect the final standings, but the placements for the top three teams seem pretty well set at this point. The positions in 4th through 10th could see some upheavals though.

Without further ado, the VSSRC results for the top 10 state teams, who all scored less than 300 points on the Highest National Speed Ratings 2021 by Tully Runners. We tried to eliminate the runners from CA beyond their 7th guy from the scoring of the other states, as the Golden State has had a year that has just gone double platinum propelled by a Newbury Park team that has to be the best ever (and next year will likely be still greater).

So yes, the CA guys had everything locked up even before the Newbury Park team headed down to AL and boosted their ratings up at the RunningLane Championship. With four CT guys in action at Eastbay Nats to NJ's two, CT has not only the numbers but also a much bigger space for movement in the rankings, but 38 points is a lot to make up. Michigan has four guys at Eastbay, while NY and OR have three and IN has two, so there could be some shuffling going on in team placements in the top 10. Lots to watch for.

As to the girls, CA again has things sewn up with a 62 score while NY is in 2nd at 109 and CO is in 3rd at 126. There is little chance for movement among the top three, as CA has five runners (Sophia Nordenholz, Sadie Engelhardt, Olivia Williams, Anna McNatt, Aishling Callanan) at Eastbay Nats, NY has four (Karrie Baloga, Zariel Macchia, Emily Toth-Ratazzi, Daphne Banino), and CO has one (Riley Stewart).