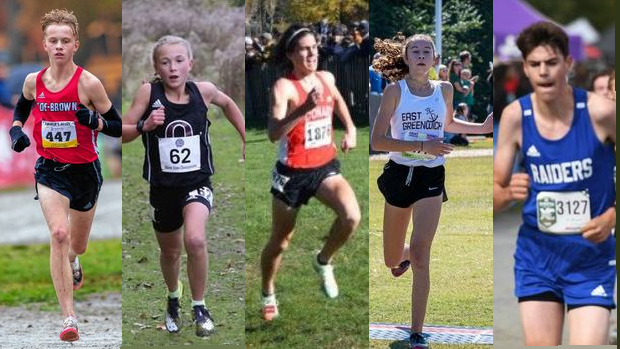 In what could be a wild and wet New England XC Championship in Thetford VT on Saturday the top six teams and top 25 runners from five NE states will be vying for the title of kingpins and queenpins of the region. Connecticut, Maine, New Hampshire, Rhode Island, and Vermont  (all but Massachusetts, which is holding its state qualifier meets the same day before next weekend's championship) will be taking their paces on a course familiar to at least a few of the non-VT teams such as Bishop Guertin and Coe Brown and the New Milford and Glastonbury girls who ran there at the big Woods Trail invite on October 9th. Thirty-five days later, the stakes are a little bigger.

The championship will be flashing lots of speed. Four guys from CT's Open championship posted 190+ speed ratings, and the girls include champs from ME, RI and CT who ran above the 140 mark. The team competition should be very close, especially on the boys' side where any one of seven teams could reasonably be seen as having solid shots at the title if they have a good day. How the weather and course conditions will affect the action is anyone's guess.

Two years ago at NE-XC at Wickham Park CT, Conard's Gavin Sherry and La Salle Academy were the champs on the boys' side (both are back for title defenses) and Falmouth's Sofie Matson (C21) and Champlain Valley won for the girls.

Here's a few guesses based on the speed-rated data. Again, the combination of speed ratings and 1-5 split marks for teams are by far the best and most accurate method for comparing teams that run on widely varying courses at different distances under a wide range of conditions. Other XC prognosticators prefer to stick with dart throws and dice rolls while peddling brute 5K times for their pronouncements, which I guess is another way to go, but here we deal with the real and right stuff, the SRs. Note that all of the numbers used here come from the teams' championship meets. If a team or runner had a bad day or were not at 100% for whatever reason, the numbers may not fully represent their full value. They thus can use the NE XC meet to show what they've really got.

The full lineups for all of the states appear on following pages and can be accessed also from the link table at bottom. Cheers to all!