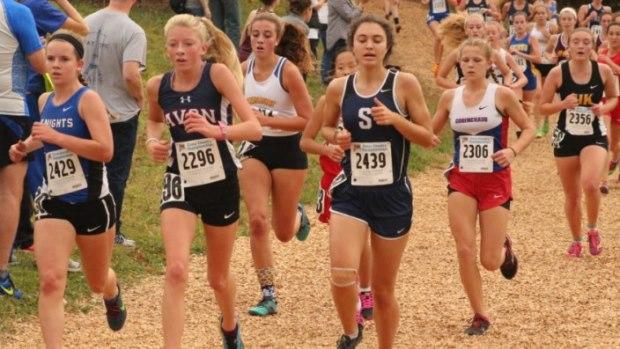 While some people new to the sport of cross country assume teams like Tolland and Glastonbury on the girls' side or Staples and Danbury on the boys' side have always been in the hunt to the State Open, you would be mistaken.

The sport of cross country in Connecticut has a rich and colorful history that has seen many dominant teams that have been replaced by this generation's superstars. The CIAC has organized a cross country championship for 82 years for the boys and this is the 42nd running of the girls State Open. All told there have been 50 schools that have taken home boys trophies and 26 girls teams have won or placed second.

Many recent fans would say Danbury has been the most dominate program in state history after taking home six title and two 2nd place finishes in 16 years. To the more "experienced" followers (AKA older) would claim Xavier has the most wins. But Connecticut was dominated during the war years through the early Cold War era by Manchester High School who won nine championships in 13 years from 1943-1955 and added a few others in the 1930s and early 1990s.

But no team has had the consistency of Xavier- Middletown under Coach Bob Michalski. From their first State Open win in 1970 until 1999, Xavier took either 1st or 2nd 21 of 30 years. This includes their "1985 Dream Team" where they scored 29 points in the Class LL meet.

This year's boys' champs Staples hasn't won a title since 1990 when they alternated wins and 2nd place with Xavier beginning in 1986. The Laddie Lawrence- Bob Michalski battles made a great rivalry and a lifelong friendship among the two very competitive and respected coaches.

The late 50s and early 60s had Norwich Free Academy take seven top two finishes in 10 years to supplant the Manchester dynasty previously mentioned. It should be noted that Hartford Public was also once cross country power in the immediate era before WWII and was sandwiched by NFA who won the first three CIAC titles in 1933, 34 and 35 during the height of the Great Depression.

The girls' history is not quite as extensive, but with teams that dominated their eras just like the boys. The most dominate girls team in CT history was St. Bernards of Uncasville who earned six championships and five runners up plaques from 1974- 1991, including a record of four consecutive from 1975- 1978. The school was coached by Bob Mondani during that time and has seen a considerable drop in numbers having gone from a Class L to Class S school recently.

Before the Tolland tornado hit the state these past three years, the Ridgefield Tigers repeated in 2011 and 12 and won three straight from 2003-05.

The Fitch Falcons won the first girls State Open in 1974 and came back at the turn of the century to win three titles from 1999-2001. Montville and Wilton both took three straight in the beginning of the 80s and 90s respectively.

These seven teams have combined to win 27 championships during the past 42 years. With five of their top seven returning, Tolland has a shot to tie St. Bernards record of four straight titles next year. But Ridgefield also has five returners and will look to tie the Saints record of six State Open championships. There are several other teams that will look to make it on to the championship stage at East Catholic.

Ten teams have combined to win 63 of 82 boys titles leaving all the other teams in the state to fight for the other 19 championships. Staples will be looking to add to their trophy case on North Ave but you know they will once again be challenged by Danbury, Glastonbury, one of the Fairfield schools or even a young up and coming small school Haddam- Killingworth looking for their first win.

Time will only tell who will add their names to the list of legendary teams that have gone through Connecticut cross country trails. But while many dreams have come to life or died on a single day in late autumn, let us not forget, it is the journey not the destination that is the most important aspect of cross country.