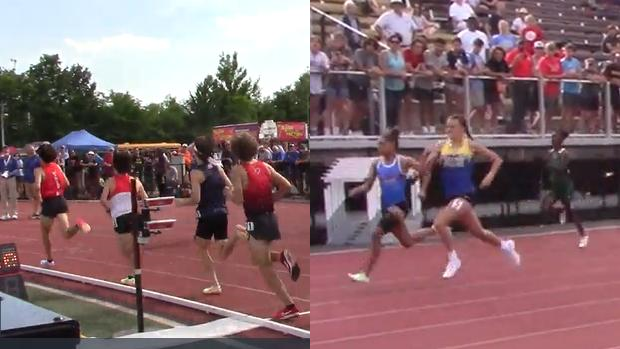 The Class of 2022 was a group like no other. The signs were all there at the June 2019 CIAC  Open in blinding sparkling neon when a high flying group of freshmen ran off with 2 golds, 2 silvers, and 2 bronzes while placing 11 times in the top 6, 15 times in top 10 (plus one more in the separate hammer throw) and contributing big legs to top relay teams. Despite losing countless meets and championships to pandemic times, they walked away with 19 marks that shattered previous indoor or outdoor state records. Four of them earned individual national championships, and the list of stellar achievements could go on and on.

On the journey from then to now, we saw Malcolm Beckford win the 200m at the Open in 2019 for Bloomfield and repeat that win in 2022 for Weaver. Danbury's Alanna Smith won the 2019 Open's 400m race and after setting three indoor state records, she took her seventh state championship in June while winning the 100m. Simsbury's Timothy Watson finished 10th in the 2019 Open high jump while watching Chet Ellis set a state record at 7-0.5, and this year he captured the state title after pushing the SR up another quarter inch at the Class L meet. Manchester's Aidan Puffer chased Xavier junior Robbie Cozean for eight laps while taking the silver in the 2019 Open's 3200m, and this year he not only swept the 1600m and 3200m races but got the SR in the 2 mile at Nationals. Weston's Shea Greene finished 3rd in the 2019 javelin while watching her junior teammate Kate Joyce get the gold with a toss of 143-7, but Greene set an SR at 161-6 at the July 2021 JavFest and then got the repeat for an Open title in June before earning a dominating win at Nationals.

But while a few athletes become legends in their rookie year, most need some time to develop their big story. Somers' Rachel St. Germain had a big presence in Class S when track resumed outdoors last year, but the high times came for her as senior as she took a Nike Indoor Nationals 5K title and then claimed her fourth Open crown in June with a win from the 1600m unseeded heat. Hillhouse's Gary Moore Jr (CT Gatorade Track and Field Athlete of the Year) competed in all three throwing events in the 2019 Open with a best of 6th in the discus, and after exceeding five very old state records indoors and outdoors (SP x 2, WT, D, HT) during his senior season, Moore swept the discus, shot put, and javelin events at this year's Open. Moore's Hillhouse teammate Olivia O'Connor was another one who took promising early results to a new level as a senior as she captured the indoor shot put and outdoor discus Open titles and set the hammer throw state record. At 6'4", Greenwich's Andrew O'Donnell was too tall to be kept off the basketball court in winter though he did put in a late stint in track this year for a 4th at indoor Nationals in the 400m, and outdoors he dominated the CT 400m as a junior and senior with two Open wins and a best time of 47.40 with a win at Loucks.

One of the C'22 winners at the Open was not visible in T&F during most of the last four years (Sydney, we hardly knew ye!), but Housatonic Regional soccer and basketball star Sydney Segalla took a turn at track in her senior season and picked up Open wins in the 200m and 400m and was named CT Gatorade Track and Field Athlete of the Year. Naugatuck's Ese Onakpoma was another one we knew for just one outdoor season, but he struck gold in the Open's long jump and silver in the high jump and triple jump. Stonington's Ryan Orr had a fairly low profile entering his senior outdoor season, but an incredible PR from an unseeded section of the 800m boosted him to the Open championship. Bloomfield's D'Jior Delisser had some success in Class S in a variety of events prior to her senior season, but this year she went to a new level with Open titles in the indoor high jump and outdoor long jump. Wethersfield's Holden Speed also arrived fairly late on the scene but had an amazing day at the Open this June at which he had three PRs including a 34-inch pick up in the triple jump for the win. Ridgefield's Katherine Rector battled through some adversity to end off her HS career with a dramatic win in June's Open 3200m.

So many big names hung out in C'22. On the girl's side  Simsbury's Olivia Birney took home a double in the 2021 1600m-3200m, and though she had a quieter senior season, she bettered her bronze in June's Open 800m with a silver at New England. Joel Barlow's Mariella Schweitzer just never stopped winning after placing 2nd in the 2019 Open 300m hurdles as she scurried around for four hurdles wins and a long jump title in the following Opens along with a silver in March's 300m. Wilton's Emily Mrakovcic posted some great times at various distances and picked herself up from a collision and fall in June's seeded 1600m to win the race and get the silver. In her last two seasons, the front-running stalwart Kali Holden of Trumbull battled at track distances from the 800m to the 5K and earned silver and bronze in this year's Opens. Capital Prep's Saryah Winborne was 10th in the 2019 Open's long jump, and she finished off her senior year with long jump silver indoors and a win in the June Open's triple jump. Rocky Hill's Marina Perry and East Lyme's Savannah Soleau battled a lot of times in the throwing events over the last two years, and it all resulted in a 1-2 finish in the shot put in the June Open. Sheehan's Darla Jagrosse was a late bloomer, but silver in the June Open's discus and 12 point contribution to her team's score boosted the Titans to a surprise championship on a squad that also included seniors Amanda Castaldi (3rd in 100m hurdles),  Patrice Mansfield (3rd in 300m hurdles), Avery Winters (5th in 400m, anchor of 1st place 4x100m relay squad that included Castaldi and Mansfield), and longtime LJ-TJ-PV workhorse Erin Brennan.

On the boys' side, Coventry's Alex Krause packed a big punch early on with a 5th in the 2019 CIAC hammer throw, and last year he hit 203-10 in the Nationals HT while also racking up a number of high places in the Open throwing events in recent years. Hillhouse's Matthew Gibbs skimmed to a repeat title in the Open 300m hurdles, while his teammate Ralphael Hawkins took the indoor Open 55m title while also running an anchor leg comeback for the Academics' 4x200 squad that was one for the ages. Fairfield Ludlowe's Steven Ditelberg was at the top in the pole vault as a senior with wins in the Open indoors and out. And from way back in the fall, we have lived with a stellar group of distance runners besides Puffer including Conard's Callum Sherry (2nd in indoor Nationals 2 mile and June's Open 1600m), Xavier's Eamon Burke (1st in indoor Open 1000m and 2nd in outdoor 3200m), Newington's Michael Bohlke (24th in Eastbay XC Nationals and 5th and 4th in outdoor Open 1600m and 3200m), Avon's Carver Morgan (4th in Open and New England in June), Tolland's Luke Stoeffler (3rd in Open 3200m and 7th in Nationals' 3K steeplechase, and Hale-Ray's Sean Kennedy-Wonneberger (Loucks Games winner with a CT #1 of 4:11.96 in the mile).

Among the thousands of seniors who labored for all-out glory this year, have we left anyone out? Well right, yes, there are three more athletes we didn't really get to see that much of in May or June due to physical issues. New Milford's Claire Daniels had an explosive early XC season, and even after being laid out for weeks with mono, she pulled herself off the sick bed to help lead the Green Wave to the Open and New England titles. And Fairfield Ludlowe's Anna Keeley never quite got an Open title even with a number of high places, but her win in the indoor New England 1600m race was another one that will be remembered in future ages. And then finally there's Callum's brother, Gavin Sherry (4th in 2019 Open 3200m). He had to sit out most of the outdoor season, but last year's 4:01.88 in the 2021 June Open (second of eventual seven SRs), and the 3rd at Eastbay XC Nationals, and 1st in the indoor Nationals 2 mile followed by the 4:02.69 SR in the mile -- these are just legendary. We can forgive Stanford-bound Gavin and Callum for taking the westbound train out of here because another set of Sherry twins are sticking around. We expect to be including them in a big senior class tribute in 2025.

The top 50 senior performances in each of the standard individual events plus the mile and the hammer throw's top 10 are presented on the following two pages.