I have seen the future and the future is looking good.  The Connecticut Middle School State Championships were held on Saturday at Manchester High School and we got a peek of the next generation of Connecticut track and field standouts.

Four meet records were set on this warm day.  Both hurdle marks went down.  In the girl's 55HH race, defending champion Sam Pomeroy of New Fairfield Middle School ran a 9.18 to take down Mia Christie's time of 9.22 set two year ago. Pomperoy also took 4th in the long jump with a 15'5 jump.

8.41.  He also came back at the end of the day and helped his Edgewood teammates Ralph Hawkins, Shahanie Jaynes and David Chambasis take gold in the 4 x 400m with a time of 4:02.19

The boys also broke the 4 x 100m when Portland's team of Simon Nihezagire, Jack DeToro, Brady Talerico and John-Paul Runte crossed the line in 47.61, breaking RHAM's record of 48.36 set in 2010.

A familiar last name for high school fans might be Tia Stapleton, who's old sister Tess was the State Open champion in the 55HH this indoor season.  The Ludlowe freshman is also currently leading the state in the long jump with an 18'8.5.  Well the apple doesn't fall far from that branch of the apple tree because her younger sister Tia, who competes for Roger Ludlowe Middle School won the long jump with a leap of 16'0. 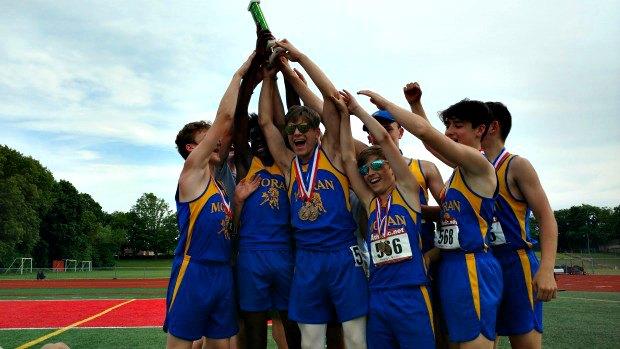 She also took fourth in the high jump clearing 4'6.

In the battle for the team title, James Moran Middle School of Wallingford brought home the title outscoring Two Rivers Middle School of East Hartford 49- 43. Moran didn't have a single champion, but they did it in a truly team fashion, raking up a number of seconds, thirds and fourths.

in 4'8 and Brooke Predham surprised everyone with a nearly 10 ft PR of 77'6 in the discus throw and won the event.  Also contributing big points was Courtney Dacunha  finishing in 27.50 for 200m and taking 3rd in the long jump with a 15'7.

This gave them 61 points to Moran's 47 and Fairfield County rival Roger Ludlowe's 46.6.