Two years ago, Emily Sienna of Nathan Hale-Ray High School burst on the scene with a 6th place finish at the State Open.  Last year, she was recovering from an injury and didn't quite live up to her expectations.  But at The Blue Devil Invite on Friday, the senior faced the New England 3200m champion Elizabeth Stockman of Rocky Hill and ran her fastest time in two years to prove she has returned to the top echelons in the state.

Stockman's big improvement last came winter where she developed into a national qualifier with a 10:31 two mile. She ran 18:09 on the 2.87 mile course on Friday to defeat Sienna by 21 seconds.  But both runners will meet up again later in the season where the stakes will be higher.

With the exciting battle up front, Hamden High used its superior depth to take the team win and slipped by runner up Rocky Hill with a score of 59-92.  The Green Dragons were led by Ella Bradford who finished 5th and her teammates all finished in the top 21. 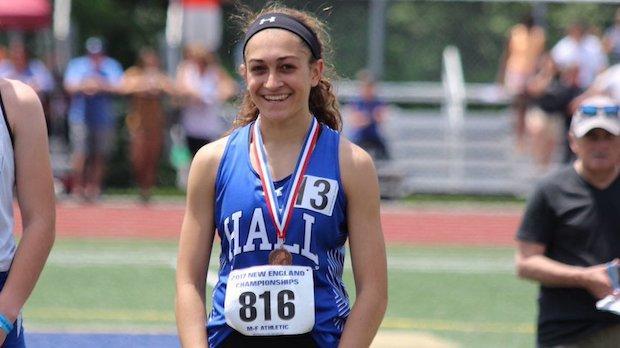 out in the Girls Varsity 1 race.  Jenna Zydanowicz of Hall was undefeated in Connecticut last year until the State Open where she went out to hard and was forced to drop out.  With a year of experience, showed the experience of a veteran and defeated All New England Kylie Raymond of Somers, running 18:25 to 18:33.  In what could be preview of the State Open, last year's 4th place finisher Kate Hedlund of Manchester took 3rd on Saturday in 19:25. 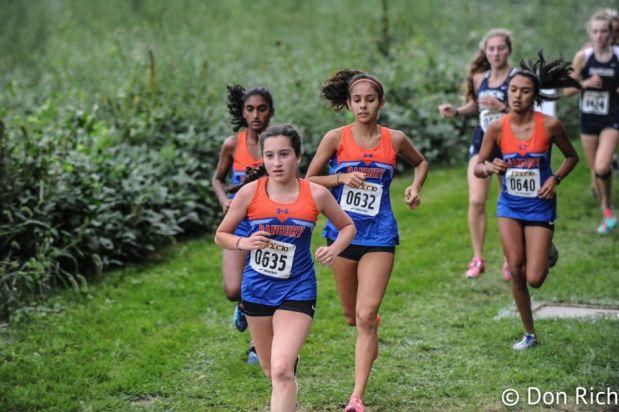 winning in 19:51.
Following one place behind was Southington who took 3rd in the Division 1 race with 95 points.
_________________________________________
Even farther away, Danbury girls traveled to Kutztown, PA to compete in the PTXC 10 Invite.  They took 11th in the loaded field without New England 1600m champion Lauren Moore who was taking the ACT.  Instead, her fellow senior
Cassandra Sturdevant led the team with a 43rd place finish with just over a minute separating her from the team's 5th runner.
The Hatters are currently ranked 2nd in the soundRUNNER Connecticut High School Coaches XC Poll and will compete out of state once again next weekend at the Amherst Invitational in Mass.
Tweets by @MileSplitCT