The track and field world lost a legend on Wednesday when it was announced that two- time Olympic champion and Hall of Fame coach Lindy Remigino passed away at his home in Newington on Wednesday.

Remigino was 87 and fought a two-year battle with pancreatic cancer. His son-in-law, Ron Knapp, announced the death in a tribute on his website MySportsResults.com Thursday afternoon.

Lindy, who was named after the famed aviator Charles Lindbergh, began his athletic career at Hartford Public High School where he set the National High School record for 50 yards with a 5.3 and he won the 100-yard title in the 1949 New England high school championships running a New England record of 9.8 seconds.

He continued running at Manhattan College where he was an IC4A champion but was not even the best sprinter on his college team in the spring of 1952, the year of the Helsinki Olympics. He failed to qualify for the AAU finals that year and barely qualified for the Olympic trials by finishing fifth in the NCAA championships but managed to take 2nd in the trials.

When he stepped on the track for the Olympic final, he and three other runners finished within 14-inches of one another with Remigino being declared the winner with a time of 10.4.  He came back later in the Games to claim his 2nd gold medal in the 4 x 100m with a time of 40.1

While Remigino didn't make another Olympic team, he continued his contribution to the sport and became a physical education teacher and track and field coach for 43 years at his alma mater. His teams won 31 state championships with a dual meet record of 274 wins against 30 losses with 12 undefeated season.  He also coached 151 individual and 39 relay CIAC champions during his career, along with 12 All Americans.  He was inducted into no less than 11 different Hall of Fame organizations and recently was honored at Hartford Public High in February with a banner listing his  achievements.

But his real lifetime accomplishments weren't only represented by his medals and trophies.  It was in the impact he had on the Connecticut track and field community.

Danbury track and cross country coach, Rob Murray began his coaching career in the mid- 90s as Remigino was ending his stated, "he was the gold standard.  He wasn't just a great coach, he was a great mentor, advocate of the sport and a good person who helped so many people.  I don't think there is anyone else with that whole package."

Former Manchester High and current Trinity College Coach, George Suitor was a long time rival and friend of Remigino's, talked about how he made him feel as a young coach starting off.  "He had all these credentials but he always made you feel important, like you were part of what was going on."

When Connecticut athletes weren't allowed to compete out of state, except under special circumstances, 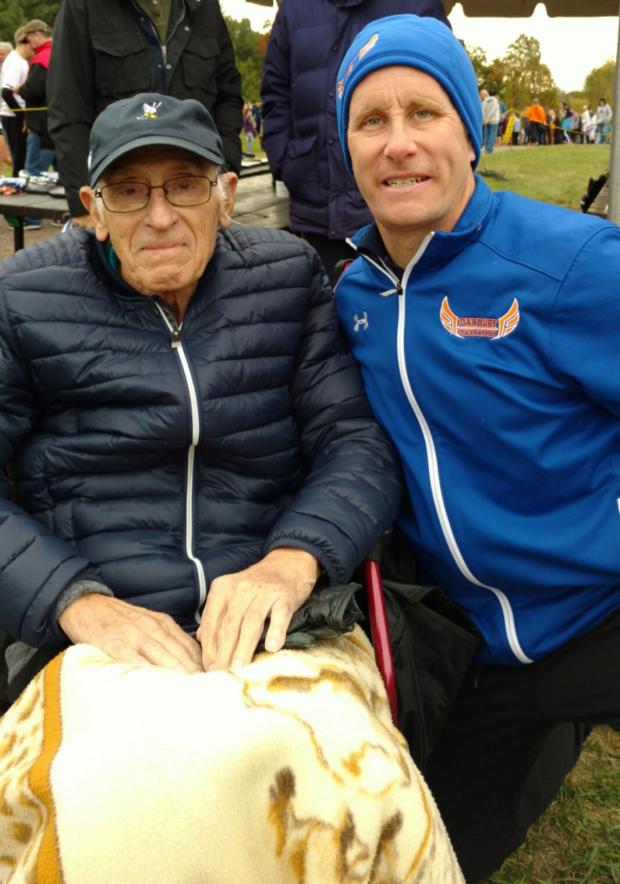 he began the Hartford Public Invitational and used his connections to invite teams from all over the Northeast to compete in the Nutmeg State. According to Suitor, "It was one of the finest events in Connecticut for 40 years and many state, conference or school records were set there."

And speaking of records, we can all thank Coach Remigino for compiling the CIAC and Connecticut's All Time state records.  He would print a top performance list and hand it out to coaches at the state meets.  By 2000, with the advent of the internet age, his son- in-law started the web site Mysportsresults.com for the purpose of publishing the state records for all to see which he continues to do to this day.

Remigino is survived by his wife of 65 years June (Haverty) and their five children - Patty, Betty, Linda, Kathleen and Michael. Most coaches have to balance their lives between their sport and their family, but Lindy brought his family with him into the sport. Kathy ran the hurdles for Northwest Catholic and Knapp's wife Betty was the women's coach at UConn and athletic director at Conard.  His son Michael held the Connecticut state record for 800 with a 1:49.95 that lasted 24 years until Hamden's Chris FitzSimons knocked a second off the time with a 1:48.83 in 2010.

Remigino's talent has been passed down to the next generation.  Michael's two boys have been recently running quite successfully for Conard High School.  Mathew who just graduated this year, was one of the best freshman in the state four years ago but was sidelined by injuries which prevented his progress.  But Tyler is still there to carry on the family legacy and has run some of the top freshman times in the state in the 1600m and 3200m this year.

A Mass of Christian Burial will be held at 11 a.m. on Monday at St. Mark the Evangelist Church on 467 South Quaker Lane in West Hartford. In lieu of flowers, please consider contributions to the following organizations: Hartford High School Athletic Hall of Fame or the Smilow Cancer Center at St. Francis Hospital.