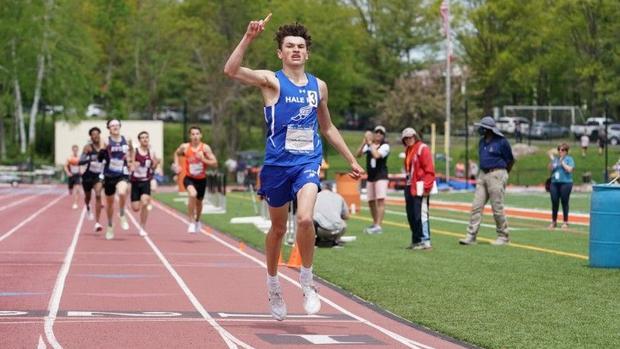 An electrifying final lap in the mile by Hale-Ray's Sean Kennedy-Wonneberger lit up the final day at Loucks. The senior Noise maker trailed the early leader, top-seeded Myles Liss-Riordan of Dexter-Southfield VA, by more than four seconds after both the first and second laps and almost the same after three. But when Monticello NY's Evan Waterton decided to launch an attack with 400 meters to go, Kennedy-Wonneberger went with him. Surging away from Waterton on the back straightaway, Kennedy-Wonneberger then blasted past Liss-Riordan on the final turn as he posted a sub 60 second final lap for CT-best 4:11.96 time.

Ridgefield's Steven Hergenrother and Avon's Carver Morgan were also in on the fun in that that final section of the mile as they finished 2nd and 3rd behind Kennedy-Wonneberger with times of 4:14.83 and 4:15.03. Other distance events also provided some CT-best marks as Manchester's Aidan Puffer ran an 8:53.92 while finishing 2nd to Fordham Prep's Myles Hogan in a Friday evening 3200m race that saw Kennedy-Wonneberger finish 7th at 8:53.92. New Milford's Collin Walsh also picked up a CT-best in the 3000m steeplechase while finishing 4th in 9:34.38, while Manchester's Sean Barkasy was close behind in 5th at 9:35.17.

Other CT bests at Loucks on the boys side in non-winning efforts included Fairfield Ludlowe's Steven Ditelberg with a 4th in the pole vault at 14-0 and the Simsbury sprint medley relay team (Gabriel Park, Timothy Watson, Kyle Paterson, Daniel Coyne) in 4th at 3:35.75. The CT Loucks Winners List below includes a few other state #1 performances.

Highlights for the CT girls at Loucks were especially strong in the field events where they picked up three wins. State best marks in non-winning efforts were set by Weston's Ellison Weiner with a 4th in the pole vault at 11-0, Ridgefield's Deirdre Flanagan in the 2000m steeplechase with a 4th in 7:22.18, Greenwich's Esme Daplyn with a 3rd in the 800m at 2:12.64, Trumbull's Kali Holden with a 6th in the mile at 4:57.18, Trumbull's Katie Marchand with a 7th in the 3200m at 10:36.63, and Ridgefield's distance medley relay team (Georgia Keller, Elaine Mathews, Grace Hooker, Katherine Rector) with a 2nd to US #1 Saratoga at 12:10.29. Alana Martin of Windsor didn't quite get a CT #1, but she finished a strong 2nd in the 100m hurdles at 15.30.

Elsewhere in dual action during the days before Loucks, Staples' Jalen St. Fort got a CT #1 time in the 800m at 1:55.10, Christopher Hergott of Hamden got the top long jump at 22-10.5. Naugatuck's Allison Murphy got the state leader in the 100m hurdles on Friday at the Torrington Invite at 15.23, and East Lyme's Savannah Soleau got the top shot put mark on Saturday at the Greater Hartford Invite with a throw of 38-6.5