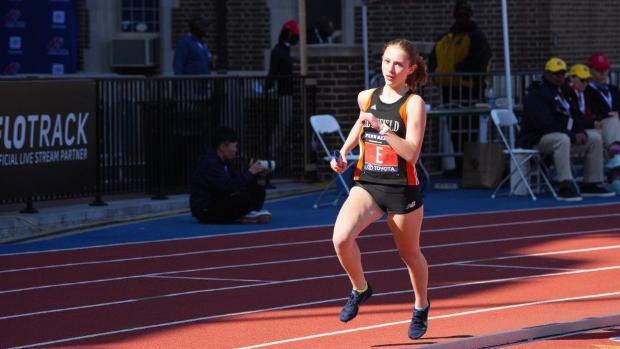 There was some monumental action for CT athletes at Penn Relays, a trio of local weekend invites, and some scattered big performances in dual meets. Fourteen of the CIAC or prep schools from CT headed down to Philadelphia for the three-day Penn Relays Carnival featuring college and high school action, and the CT athletes had some very nice results.

The Ledyard invite had some strong throwers results as Keenan Lamontagne of Woodstock Academy won the discus in 158-5 and the shot put in 46-4.5 and Peter Walsh of Bacon Academy claimed the javelin in 154-6, and for the girls Lindsey Reilly of St. Bernard won the discus in 102-10 and Sjodin Fedikovich of East Lyme took the javelin in 100-0. Plus the meet had that old classic 4x100m throwers (aka weight man's) relay, which was won by Daniel Hand on the boys side and Waterford on the girls end.

An upcoming weekend of wetness could put a damper on times and distances in the meets of the next days that include the Lady Titan Relays on Friday and the Marty Roberts \ Coginchaug and Middletown meets on Saturday. The following weekend will be highlighted by the three-day Loucks Games in White Plains NY for which 32 of CT's top teams are registered and which will be broadcast in full by MileSplit. Can't wait.