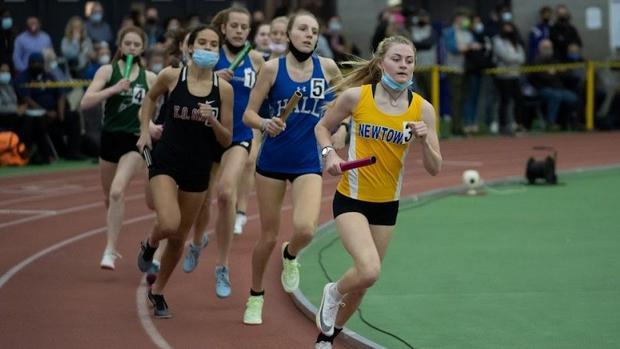 The CIAC Open on Saturday, February 9th was host to a state and meet record by Conard's Gavin Sherry in the 1600m and a meet record by Hillhouse's Gary Moore Jr and a full day of incredible action. Though there were a lot of memorable performances, nothing could beat the ending to the day's first event as Hillhouse's Ralphael Hawkins did the impossible while bringing the Academics back in the 4x200m. The girls 4x200m ending was almost as spectacular in the showdown between Alanna Smith's Danbury squad and Sheehan.

Smith's 22 1/2 points from wins in the 55m and 300m and leg of the 4x200m led the Hatters to the Open championship on the girls' side, and Jonathan York's win in the 300m along with Tobias Ruffo's 2nd in the 600m and 30 points from relay places carried Hall to victory on the boys' side.

Besides Smith's double gold, the dual individual event winners included Gavin Sherry in the 1600m and 3200m, echoed on the girls side by Somer's Rachel St. Germain, and also Joel Barlow's Mariella Schweitzer, who was the top point producer on the day with wins in the 55 hurdles and long jump and a 2nd in the 300m.

For the top six finishers in all but one of the events, it's on to the New England championship on Saturday, March 5th in Boston. Pole vaulters are not included there, but the Eastern States meet at the Armory in NYC on Tuesday, March 1st will be the beneficiary of NE's omission.