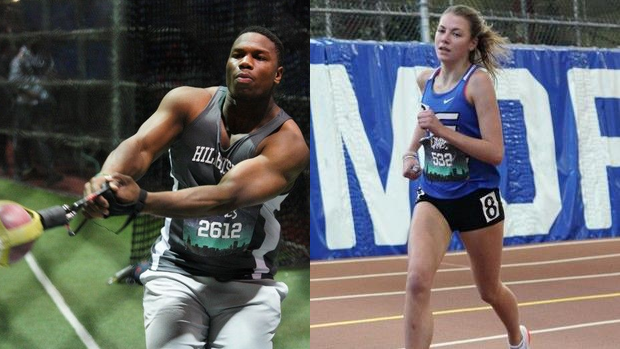 CT schools have been heading down to NY venues at the Armory and Ocean Breeze  over the last two months, and the big marks at near-state-record levels are being pumped out in a few cases. Athletes have also been ratcheting up their marks at dozens of meets around the state, so the League meets that could be starting this weekend (though weather reports are not pretty) should be studded with some huge performances.

During the past weekend, the New Balance Games at the Armory on Friday and Saturday fielded some awesome CT results propelled again by Gavin and Callum Sherry in a distance event, this time the 2 Mile. Gavin Sherry took the win and unofficially bested two state records on the way to an 8:50.05 US #1 time that fell just short of Alex Ostberg's CT 2 Mile record of 8:48.88 set at the 2015 Nationals. But Sherry's en route marks of 8:15.57 for 3000 meters and 8:47.03 for 3200 meters were well under the official state records. In the same race, Callum Sherry finished 2nd with a PB and US #3 9:06.50 time. Zachary Taubman and Benjamin Lorenz of Staples placed 12th and 14th with times of 9:35.22 and 9:42.31. The CT field girls also made their mark at New Balance. Maloney's Shaylin Murphy finished 2nd in the high jump with a 5-2 best, Tia Stapleton of Fairfield Ludlowe took 3rd in the long jump at 16-7.25 and Danbury's Giuliana Robles was 6th at 16-5. Weston's Ellison Weiner got 5th in the pole vault with a CT #1 clearance of 11-0 in the pole vault. Hillhouse's Olivia O' Connor won the weight throw with a CT #1 51-5.75 and also finished 2nd in the shot put at 36-11. Hillhouse's Gary Moore, Jr. again led the headliners for the boys field stars as he continues to chase Mel Taylor's 53-year-old state shot record. Moore won the SP at 62.7.75 that was 7.25 inches shy of the record, and he then took the weight throw with a 71-5.5 toss. Fairfield Ludlowe's pole vault tandem of Steve Ditelberg and Bennett Hemphill also did nicely with a 14-6 for 3rd and 13-6 for 7th respectively.

Summarizing all of the events that have happened around CT recently is simply too exhausting a task for a state that has no structured repository of results. One recent meet with strong results was the SCC Coaches Invite whose top marks included Eamon Burke's 2:44.66 in the 1000m for Xavier, Sean Kennedy-Wonneberger's sweep of the 1600m and 3200m for Hale-Ray, Brittani Westberry's 1:40.95 in the 600m for Windsor, Sheehan's 1:46.30 mark in the girls 4x200m, Glastonbury's 4:08.54 in the girls 4x400m, and EO Smith's 9:46.44 in the girls 4x800m. Bloomfield's D'Jior Delisser also had a big day with a 5-4 in the high jump and 17-7 in the long jump. Sheehan's Erin Brennan was 1st in the pole vault, 2nd in the long jump, and ran on the Titans' winning 4x200m squad.

MileSplit has not been able to get extensive coverage going for CT this year as the media has not been allowed in for the invites we have tried to cover, and scheduling conflicts have nixed other chances. But we do hope to finish the year off in February with a big package of livecasted League meets (four or more), the four CIAC Class meets, and the State Open. Stay tuned. Should be a blast.