The  predictions for the New England XC Championship in North Scituate RI on Saturday are for wild and wet action as Nicole pushes her way north. Dry running gear and extra pairs of shoes could be key as the top six teams and top 25 runners from five NE states will be vying for the title of kings and queens of the region. Connecticut, Maine, New Hampshire, Rhode Island, and Vermont  (all but Massachusetts, which is holding its MIAA state qualifier divisional meets the same day before next weekend's championship) will be trailblazing for glory as the boys head out at 11:30 AM and the girls 45 minutes later at 12:15 PM.

One individual champ from last year is back and in full form as Ruth White of Orono ME goes for a repeat and looks to be well out in front, though Moses Brown's second-seeded Sophia Gorriaran is a little closer to home turf in RI (by about 4-hours driving time). The four CT boys who swept the top spots last year are gone as part of a senior sextet of finishers in 2021, and there is some uncertainty about the current status of the top returner, Coe Brown's Aidan Cox, who reached a speed rating of 196 at the NH Battle of the Border meet in early October to place him at 4th in the nation. Cox has not been at the same level the last few weeks and did not run in the NHIAA Meet of Champions. Meanwhile, Ocean State and Manhattan Invite champ Devan Kipyego of St. Raphael Academy RI finished 11th last year and has been blasting undefeated into the 190 SR's all season, reaching 196 in the RI Class meet along with a win in the state championship meet on Saturday.

The top seven boys teams and top four girls teams are back from last year. VT's U-32 won in 2021 in Thetford VT but lost its top 3 to graduation. This year it is Bishop Hendricken on RI home turf that is the slight favorite, but CT teams Hall and Ridgefield finished in the top 5 last year and should be challenging up top. CT's New Milford girls won last year but finished 2nd at the CIAC Open to Glastonbury, who are the favorites this year, with VT's Champlain Valley close behind. The top RI home team again is East Greenwich behind Reese Fahys, but the Avengers were not at the championship last year.

Below we've provided some info on this year's races based on the speed-rated data from the Tully Runners site. Again, the combination of speed ratings and 1-5 split marks for teams are by far the best and most accurate method for comparing teams that run on widely varying courses at different distances under a wide range of conditions. Other XC prognosticators prefer to stick with dart throws and dice rolls while peddling brute 5K times for their pronouncements, which I guess is another way to go, but here we deal with the real and right stuff, the SRs. A speed rating point is equal to 3 seconds, and is based on the season's data compiled from hundreds of thousands of runners. Generally in XC a tighter pack or smaller 1-5 compression number is better, especially in a massively populated meet like New England. But if you are one of the teams at the back of the New England field, you will likely do better with a big split number since your top runners will shed some points further up the tally above the biggest bulge of finishers.

Note that all of the numbers used here come from the teams' championship meets. If teams or runners had a bad day or were not at 100% for whatever reason, the numbers may not be fully representative of what they can do. They thus can use the NE XC meet to show what they've really got.

Also, ME runners operate in a bit of a black box since very few venture out of state before the New England championship rolls around. Speed ratings are based on data from runners across the nation, and in ME's case we have made the best stab at an evaluation based on a few runners such as Ruth White, Cary Drake, and Maddox Jordan, but the assigned ratings appear to fit closely with past results. Note though that the highly competitive environment at New England can spur runners to much higher efforts than they put out for a win in a less taxing state championship.

The full lineups for all of the states appear on following pages and can be accessed also from the link table at bottom. Cheers to all! Bishop Hendricken finished 4th last year with two juniors on the lead, and this year following a win in the RIIL state championship the Hawks enter New England with the top speed rating and a very decent compression numbers, which along with the hominess factor (under half hour drive to North Scituate), BH should have a leg up this year. CT champ Hall is close behind, and a bunch of the guys at the back of the Titans' lineup had off days in the heat at the Open, so there could be some big movement there.

The 3rd-seeded team Ridgefield CT had a giant boost at the state championship as they did last year while winning the Open and then finishing 3rd at New England, and the Tigers are within  striking distance of the title if they can get a little higher at the back. Danbury CT and La Salle Academy RI have very tight compression numbers and should contend for the title. Coe Brown won the NHIAA Meet of Champions without top guy Aidan Cox in the lineup, and it is unclear what his situation will be on Saturday. With Cox in the lineup at anywhere near full strength, the Bears would be 4th seeded in the field, and we have selected a middle ground of putting Cox on the starting line with an SR about halfway between his season's best and his rating at his last run in the Class meet. Among the other teams to keep an eye on is St. Johnsbury VT which did not make it to Thetford last year but has a pack that could be dangerous.

Again the numbers are reflective only of what teams did at their state championships, and Saturday's efforts could be different under the varying competition conditions. Glastonbury finished 3rd at New England last year and had a dominating performance at the CIAC Open this year to take on the favorite's role off of the state results. But again, Champlain Valley VT was 4th last year and also 4th in the huge Manhattan Invite - Eastern States race where they posted a big 110 SR. The Redhawks have pretty similar numbers to the Guardians' from the VT state championship and likely did not need to push as hard at Thetford. So if CV is running like they did at Manhattan, they will be hard to beat.

Beyond the top two teams, a number of squads could make their mark. ME champ Bonny Eagle entered last year's meet with the 7th best numbers and ended up finishing 2nd, so who knows how high the Scots' can go in high competition with some very solid numbers if they can pull up the back a bit? East Greenwich and Cumberland will be representing RI at home, so that could be a big boost, especially for the RI Class A champ Clippers if their usual #5 runner is back. Last year's New England champ New Milford had an off day at the CIAC Open, but perhaps the Green Wave will roll again on Saturday. Likewise, Ridgefield CT took the final berth at the state championship but could be among the top 5 teams if their lead runner is back at full strength. 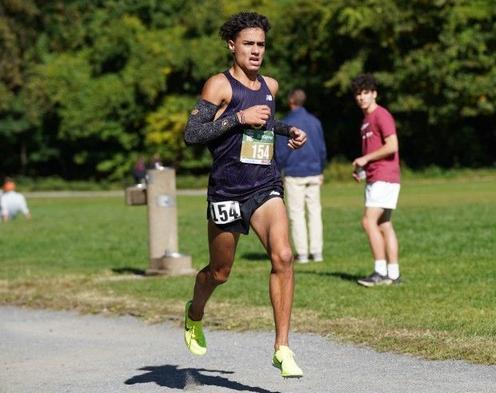 St. Raphael's Devan Kipyego will be running near to home on Saturday, and the Ocean State and Manhattan-Eastern States undefeated champ is the pick for the win on Saturday, even if his time last Saturday was a little more relaxed. Coe Brown's Aidan Cox has run at around the same level as Kipyego this year, but it is unclear where Cox stands right now. Other guys who come into the action off of 185+ SRs at the States meets include Ridgefield's Steven Hergenrother, Gilford's Patrick Gandini,  Lebanon's Birhanu Harriman, Suffield's Griffin Mandirola, and Hall's Isaac Mahler.

Speed ratings are from state championship results, but top season performances are also noted where apt. Reigning champ Ruth White of Orono ME is again the big favorite at North Scituate, but local girls Sophia Gorriaran of Moses Brown RI and Caroline Cummings of La Salle RI have reached the 130+ SR level during the season, as has Brianna Malone of Portsmouth Christian NH. Cary Drake of York ME, Reese Fahys of East Greenwich RI and Addy Thibodeau of Bonny Eagle ME have also gone 125+, and CT champ Brooke Strauss of Glastonbury has been on a big kick back.