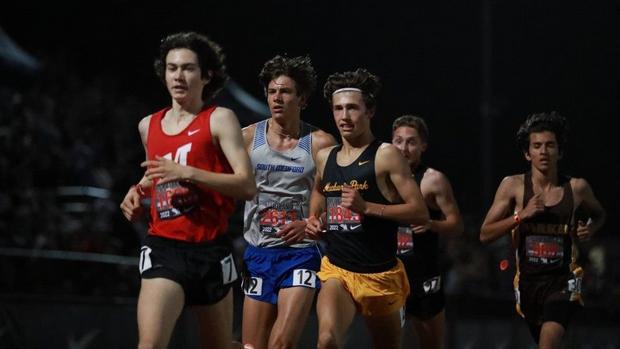 Manchester's Aidan Puffer kicked his senior season into high gear over the weekend as he flew out to the Acadia Invitational in California to compete in the 3200m on Saturday evening with a big group of mainly West Coast guys along with a mix of runners from Colorado, Texas, and Illinois. Out west some of the athletes such as the 3200m' winner Colin Sahlman of Newberry Park have been competing in outdoor competitions since January, merged in with their indoor season.

At Northern Arizona University where Puffer will be running next year, the official recruiting standard for the 3200m distance is 8:58, and though his conversion from 2 mile bests were substantially better than that mark, Puffer's PR in the 3200m before Acadia was 8:59.25. But in the highly competitive Acadia action, Puffer pushed his 3200m PR down all the way to 8:46.48, about 2 1/2 seconds off Alex Ostberg's state record at a legendary Loucks Game race in 2015.

During early April when most of the results coming in have been from dual meets, Puffer has not been the only one to sample the West Coast fare. The previous weekend Fairfield Ludlowe junior Tia Stapleton was out at the Stanford Invite, where her sister the state indoor hurdles record holder Tess is a Cardinal freshman. Stapleton finished 4th in the high jump at a current CT #1 of 5-1 and then almost took the triple jump with a PR of 36-2-25 to place 2nd.

The duals and early invites have been providing loads of promising results from the first week's action. In the guys weight events, Stonington's Joshua Mooney hit a PR of 172-5 in the javelin to lead the way for CT, and Coventry's Alex Krause is not far off his outdoor best in the shot put at 47-2.5 for CT #1 in MileSplit data while he awaits a chance at the hammer throw. In other field events, Simsbury's Timothy Watson has started off the year big at 6-8 already, Suffield's Avery Cipcic has gotten a PR in the long jump at 21-7.75, Fairfield Ludlowe's Steven Ditelberg has gone up to 13-0 in the pole vault, and Lyman Memorial's Justin Thuotte added more than 4 feet to his PR at 45-0.5. Hillhouse's Gary Moore Jr leads the discus at 166-9 while also having gone to 62-1 at a Time Trial event while prepping for a go later this season at the 21-year-old state record of 65-0.

In the girls field events, along with Stapleton's top marks in the high and triple jumps, Shelton's Audrey Kozak leads the long jump with a PR 17-0 and teammate Susan Porto leads the pole vault with a PR of 9-0, Windsor Locks' Tristin  Oberg leads the discus at 112-10, Bacon Academy's Jennifer Whipple is tops in the shot put at 35-10, and Trumbull's Maya Marin has the best javelin heave at 105-2.