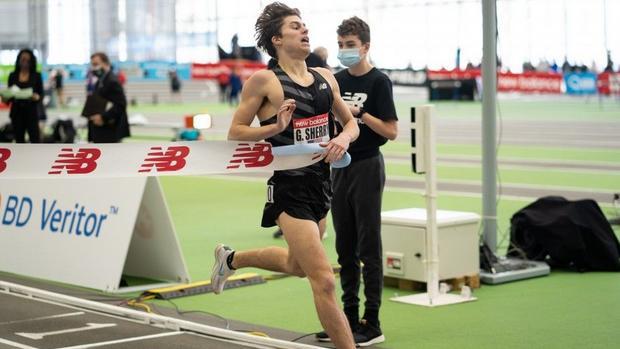 Sunday February 6th was a crazy day for CT indoor track as the League meets wrapped up at the Floyd Little Athletic Center with the rescheduled SCC and CCC meets and in New London for the ECC D1 and D2 meets. Missing at least from individual races at those two meets were a quintet of CT's top distance guys who all blazed to indoor mile PRs that included a new state record at the New Balance Indoor Grand Prix at Ocean Breeze. The leading CT distance girl was also there, though she did not have to miss her League meet, which was held the previous weekend. And finally, there was yet another top CT distance guy down at Virginia Beach for the East Coast Invite last weekend, and he not only set a mile PR down there but returned to run and win the CCC's 3200m championship.

At the NBIGP, Conard's Gavin Sherry continued his reworking of the state record books as he sped to a 4:05.10 time that shaved more than 1 1/2 seconds off his previous SR set in early January at the Hispanic Games. Sherry led all the way, running the the first quarter mile in 59.94 and then putting together fairly consistent quarters the rest of the way to finish a little over two seconds ahead of NJ runner Marco Langon.

Manchester's Aidan Puffer pushed up to 2nd at the halfway point and then came home in 3rd with a 4:10.41, about 1 1/2 seconds off his best mile time set outdoors last June. Gavin's brother Callum Sherry pushed his brother through the first quarter in 2nd and then fell back to 6th before making a late surge to place 4th in 4:10.69 to knock almost three seconds off Millrose Games time. Both Callum and Gavin got back to New Haven in time to run legs of Conard's 2nd-place 4x800m team in the CCC League meet.

Two other guys setting new indoor mile bests at NBIGP were Newington's Michael Bohlke and Xavier's Eamon Burke. Bohlke took 7th in 4:14.01, and Burke placed 9th in 4:16.79. So five CT guys under 4:17 at NBIGP had some resonance with last June's outdoor Open when ten guys ran under 4:20 in the 1600m.

Two CT girls were in action in the NBIGP mile. State leader Rachel St. Germain of Somers was sitting back in 8th at the halfway point but put on a furious charge to run the fastest final quarter among the competitors at 1:11.46 to take 4th as she ducked under the 5 minute mark at 4:59.22. Southington's Jackie Izzo was also in the mile and finished 9th in 5:12.36, about two seconds off her PR from two years ago.

Avon's Carver Morgan chose a different path as he headed down south for the East Coast Invite. Morgan had a great showing with PRs in both his 1600m (en route) and mile times as he finished 2nd in 4:19.25. He then hustled back to New Haven for Sunday's CCC championship and captured the 3200m win in a PR of 9:40.54.