In a battle of cross town rivals, Danbury High defeated Immaculate by a single point to claim their first girls 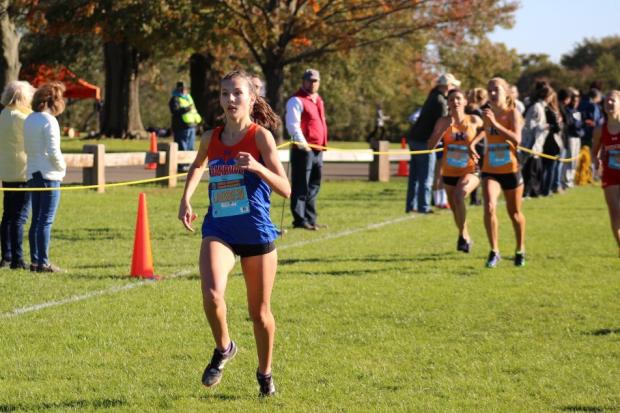 State Open title in school history at Wickham Park in Manchester on Thursday.  This was also Immaculate's highest finish at the State Open.  Last year Danbury broke a 15 year streak since they last made New Englands.  Now they are starting a new streak which they hope to continue.

The individual race wasn't quite as close as sophomore Kate Wiser of Pomperaug, last year's runner up, claimed the top spot in the race running 17:59. She joins Staples runner Hannah Debalsi as the only girls to break 18 minutes on the hilly 5000m course.  Her time was nearly a minute faster than conference rival, freshman Claire Daniels of New Milford who took the runner up spot.  The two led a wave of underclassmen who took the top six spots and eight of the top ten.

The State Open was dominated by western Connecticut with seven of the top eight teams and 15 of the top 25 individuals coming from the FCIAC and SWCs.  On top of that five of the top 11 teams border Danbury which has Danbury and Immaculate High Schools.  (Abbott Tech girls didn't make the Open, but also won the Connecticut Technical Conference Championship.)  All this could possibly be good news for Western Connecticut State University's brand new cross country program that is about to complete its first season.

Danbury pulled off the win thanks to three factors. First of all, about two weeks ago Glastonbury's All State runner, Grace Sparrow was diagnosed with mononucleosis.   They were the #1 ranked team in the state at the time, but it is hard to replace a runner of Sparrow's caliber.

But Danbury has definitely improved since they finished nine points behind the Tomahawks at the Wickham Invitational.  A big chunk of their improvement came from the addition of Daniella Grullon-Pena.  The sophomore was a long sprinter on the track team and came out for cross country just to get in shape.  Well, she rounded her way into shape in time to be put in the varsity line up for FCIACs as their number seven runner.  Not much was expected of the cross country rookie but she surprised everyone and ended up getting All FCIAC with her 11th place finish.  She has since settled in comfortably number 2-3 spot and changed the overall quality of her team.  Her 31st place finish was just enough to put Danbury in the winner's circle.

The last factor that led to Danbury's win, was outright luck.  Just about every Immaculate and Danbury runner finished with someone a second or less from them at the line.  If one of those places switched, the results could have been entirely different.  These teams match up very well and anything can happen next week at New Englands.  But the best part of the rivalry was when both teams took a picture together at the awards ceremony. 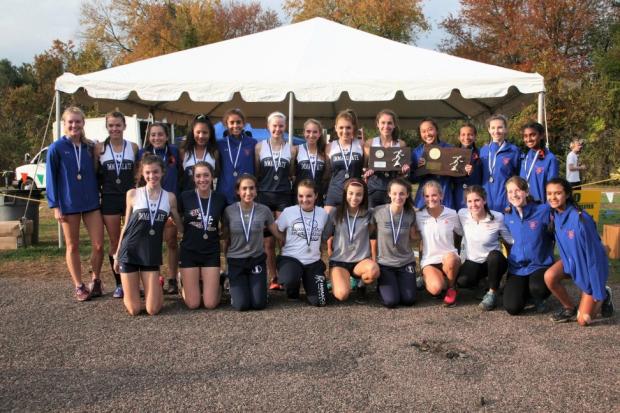 In the excitement of the close finish for the team title and Wiser's fast time, it was easy to overlook Ridgefield's third place finish. First of all, they were the only team to put two runners in the top ten.  Senior Gabriella Viggiano 8th in 19:23 with her junior teammate Tess Pisanelli finished one place and one second behind.  But more important, the Tigers have now qualified for New Englands a Connecticut girl's record 17 times.  In fact, they have only missed making the regional meet two times in the past 18 years.  Considering only 43 Connecticut teams have even made the regional meet since the state began attending in 1986, this is a noteworthy accomplishment.

Like the boys race, most of the better girls teams were 1:20-1:40 slower this week than last week's class meets which is about 16- 20 seconds slower per person.  This makes Wiser's sub 18 minutes along with Daniels and Greenwich's Mari Noble sub 19 minutes times so much more impressive.  This gives the 2nd and 3rd place finishers the 39th and 40th fastest time on Wickham's 5000m course that the girls began using in 2008.

The top 25 individual finishers and the top six teams will head north to Manchester, NH for the New England championship on Saturday.   If you are planning on attending, check out Milesplit's New England meet information page.
Tweets by @MileSplitCT