Well there has been some ups and downs for just about every team in the state and all of the best teams in the state have lost to another team some time during the season.  In short, there is no clear cut favorite to look for in the post season meets.

Last weekend Glastonbury came away with a solid win at the Wickham Invitational after losing to Hall High School the week before at the Manchester Invitational and earlier in the season in a dual meet.  While Hall was missing their number three and five runners, Glastonbury looks to be much improved.

The defending State Open championships Glastonbury were hard hit by graduation, losing four members of last year's team.  But Coach Brian was very enthusiastic at the beginning of the season saying, "there is no pressure on us and it is just fun coach these girls."

Now that Glastonbury has moved up to the top ranking in the CT Coaches Poll, Coach Collins will have to rely on his experience over the past 15 years when he has led the Tomahawks to four State Open titles and four runners up finishes to lead the new favorites.

But Hall has the advantage in a guaranteed low stick with Wickham champion Jenna Zydanowicz leading the team.  She had the fastest time of the day and has only one loss to a Connecticut runner, Kate Wiser, who ran just over a minute faster at the Manchester Invite.

But quietly lurking in the shadows is Danbury, who returns all their scorers from last year's State Open 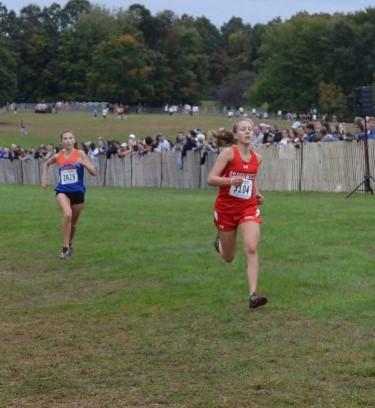 runner up team.  Wickham was their first in state invitational this season, but they have competed in the highly competitive FCIAC which features four of the top ten teams in the state.  The Hatters are also led by one of the top runners in the state, Lauren Moore who was the New England 1600m champion last spring.  While Glastonbury is a little stronger in the 2-4 spots, Danbury isn't that far behind and they should have a cushion of points if Moore can finish inside the top five finishers at the State Open.

Ridgefield girls have stuck to competing in only dual meets the past few seasons and might be overlooked. But three teams are 14-1 in the FCIAC because Danbury beat Ridgefield, who beat Trumbull, who in turn beat Danbury.  Junior Tess Pisanelli finished right behind Moore and in front of Mari Noble of Greenwich in their tri meet.  Pisanelli and Gabriella Viggiano both beat Zaffina is their regular season meet.  The Tigers fifth runner is also right behind Danbury's fifth, so they should definitely be right in the mix during championship time.

Ridgefield has Emma Langis, the State Open champion in the 300IH was also All New England in the 600m and has run a 5:25 1600m on their roster.  But according to Ridgefield Coach John Goetz, she has a hip issue and they probably won't run her.  He stated confidently "If we had a healthy Emma Langis, we would win it all.  Without her, maybe top two in the FCIAC and top three in LLs if the other girls stay healthy." 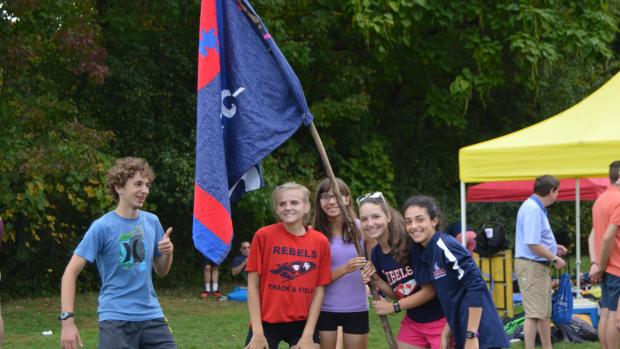 The FCIAC isn't the only conference with depth.  Immaculate, with only 246 girls in their school has become one of the best cross country schools in the state.  The Mustangs finished a respectable 5th in the championship race at Wickham. The kiss of death of most small schools is their lack of depth.  The fact that Immaculate finished so high without their front runner Angela Saidman, who was sick and their number five Ailene Doherty, was at a wedding, shows depth isn't an issue.  Immaculate's long time coach Brian Hayes underestimated their chances in the post season by saying "if everyone shows up, we will do fine."

Pomperaug who was 3rd in the State Open last fall, has not quiet lived up to preseason expectations.  They lost to upstarts New Fairfield and won on a 6th man tie breaker to Immaculate who was without Saidman who was still recovering from her cold.

The good news is the return of All State runner Maddie Villa to their line up after a slow start to her season.  Veteran coach Mark Goodwin felt the season "is not coming along the way I expected but this is the best we have felt this season.  We are still pursuing the SWC and Class MM titles."

New Fairfield has the making of a team that can contend for a Class title, but they have been bit by injury bug.  Kayla Cohen and Hazel Hudson both qualified for New Englands last year and they have a much improved pack.  But Hudson missed the first half of the season with a hamstring injury and once she returned, Cohen had her own ailment and missed Wickham.  If they can both get up to full strength the same time, the Rebels will be a team to look for in the post season meets.

New Milford girls have developed the best top four in the state, but unfortunately for the Green Wave, the top five score in cross country.  They are led by freshman Claire Daniels who had the 3rd fastest time of the day at Wickham.  If their number five can move up 20-30 seconds, that will help their chances a great deal.

In short, most of these teams are close enough to one another that anything can.  A great race from one runner or a bad race from another can and usually does make all the difference in the run for the trophies.  But isn't that why we run the races?

Check out the girls championship race at the Wickham Invitational.