Danbury boys and girls swept the Class LL championships with nearly 30 Hatters scoring points and a combined seven wins.  The boys defeated Manchester 83.5- 64 and the lady Hatters out scored Glastonbury 94- 61.

Veteran Danbury boys coach Rob Murray, who led Danbury to their 8th Class LL title in 18 years describe the key to the team's success by saying "we executed in all our events we were capable of scoring.  We used the experience of our senior class and trusted our tradition."

The seniors definitely led the way.  Sean-Michael Parkinson came in with the 4th fastest seed time but came away with his first individual state title to go along with the many championships he has been a part of in relays.

Dan Nichols has been consistently surprising people this year.  During indoor, he shocked everyone when he took the lead with 250m to go in the State Open 3200m and almost stole the race.  But Footlocker All American Drew Thompson of Fairfield Prep was able to regain the lead to put Nichols in the runner up spot.  Fast forward three months later and Nichols was able to turn the table on Thompson and win his first state championship.  He ran a 16 second outdoor PR of 9:07.30, which was less than one second off the Class LL record held by  National mile champion Christian Alvarado of Fairfield Prep.
Nathaniel Llanos has overcome an injury plagued last year and a half to take the pole vault by clearing 14-8, eight inches better than his personal best.
Finally the Danbury senior class put an exclamation mark on their day by defeating a very strong Manchester 4 x 400m that also went under the old Class LL record set by Staples in 2011. Seniors Phillip Melo, Glenroy Ford, Sean-Michael Parkinson teamed up with junior Malcolm Going, to run 3:19.38 to Manchester's 3:20.07.
The Danbury girls repeated as Class LL champions by winning three events and scoring in 15 of the 18 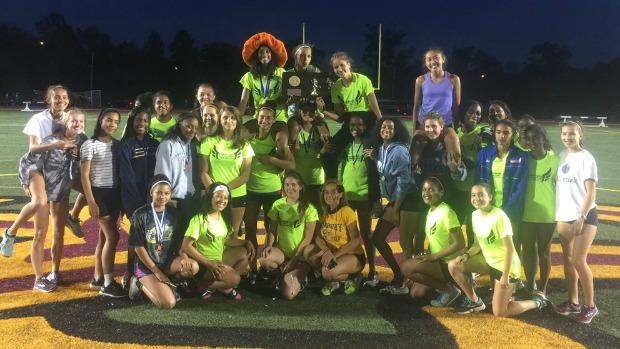 events.  Junior Lauren Moore won the State Open 1600m this indoor season and added two more state titles to her resume.  She took the 1600m by breaking the magic five minute barrier, running 4:58.22. Then a few hours later, she won the 3200m by running 11:10.64.
According to girls coach Nick Fratecelli, The biggest surprise for Danbury was junior Jaylyn Carter who came in as the third seed and won the 100HH running 15.64 and Shanell Stewart who scored big points in the 100m.
"The girls knew they would be tested by all the great competition the class meets offers" said Fratecelli. They were able to pick each other up when they faced challenges. This group of young ladies define togetherness and pride in their team."
Speaking of the great competition Class LL offered, the girls 400m saw Newtown's Carly Swierbut defeat the meet record hold and defending State Open champion Aisha Gay of Hamden.  Swierbut ran 55.42 to Gay's 56.47 which is currently the fastest time for all the athletes that will compete at New Englands.
Every time Emily Philippides of Greenwich steps on the track, there is a chance for a record to be broken.  Well, the senior just put her mark on the Class LL record book, running 2:12.71 and breaking Katie Foley record of 2:13.47 set four years ago.
Junior Ally Lewis of Norwich Free Academy soared to 5-8 in the high jump which is 1 3/4 of an inch better than Elizabeth Lodge's record set last year.  Lewis has improved a great deal since last year when she her best was 5'3.  Currently, she has the 2nd best jump in New England.
Another one who has made her way into the record books is Southington's Megan Biscoglio who moved the bar up 1/2 an inch over Jenna Callandro's record of 12'1.  The UConn bound senior has worked her way up from a best of 8'6 her sophomore year to become Connecticut's 3rd best pole vaulter of all time. 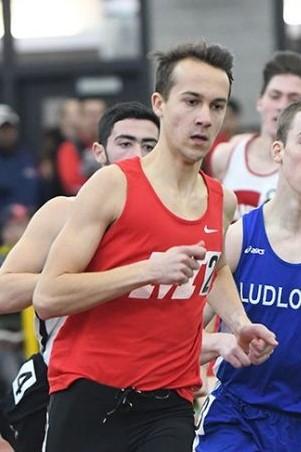 While Danbury's 4 x 400m was the only meet record on the boys side, there were still plenty of great competition.  Manchester senior Joe Pearl has been among the top runners in the state for the past few years but never managed to take home a gold medal outside of the CCC.  Pearl's time in the winner's circle finally arrived when he dropped two seconds off his previous best time and finished in 1:52.67, which currently ranks 44th nationally.
Pearl's teammate Jevin Frett is the defending State Open champion in the 400m had a slight hip flexor injury that tightened up before the start of his race.  But the senior who was hoping to lead his team to victory, bravely fought through the tightness and managed to hold off Danbury's Glenroy Ford.  Frett ran 49.30 which was about six tenth slower than his best while Ford ran about six tenths better than his best to finish only .01 seconds behind.
The winners in each race earn All State status and are invited to the Connecticut High School Coaches Association All State dinner, June 20th at the Aqua Turf in Southington.