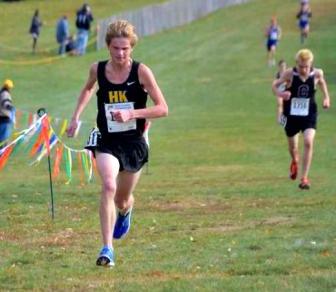 out of the top 22 finishers.  Defending SLC and Class SS champion Daniel Schumann of H-K is back as well as the next four finishers from the conference meet who all broke either 4:40 for the 1600m or 10 minutes for the 3200m.  For a league made up of mostly Class SS schools, they will be incredibly competitive at the state level.

Runner up Peter Schulten of Coginchaug had an outstanding sophomore year and finished 2nd in Class S 3200m with a 9:44. Fellow junior Shane Henderson of Old Saybrook earned All State in the CIAC steeplechase and consistently ran around 4:30 at the end of the season with a best of 4:29.

H-K's Andrew Meredith had the best track season of all SLC runners winning the Shoreline championship in the 1600m and 3200m.   He ran season bests of 4:25 and 9:37, which makes him one of the favorites for the conference and class championships.

Team Previews-  Haddam- Killingworth has won the Shoreline Conference Cross Country Championships eight out of the last ten years and this year the Cougars will go after a four-peat. Coach Matt Diglio's crew has a bright future as well since the bulk of their team last year were juniors or sophomores who finished 10th at the State Open.  The two seniors they lost out of their varsity lines should be easily replaced because they had 12 of the top 13 finishers in the SLC JV championships. 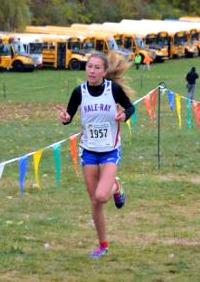 Individual Previews- Not only did junior Emily Sienna of Hale-Ray win the Shoreline by 1:20 last year, she finished 6th in the State Open and is one of the favorites to win both races.  While her outdoor season didn't quite go as planned, she still should be the favorite.  Her coach Dave Kraszewski said "She is definitely at 100%. Looks strong, had a great summer of base and will be ready to go at it this fall."

Last year's 9th place finisher Kate Daley of Morgan made huge improvements after her first season of cross country.  During outdoor track, she ended up winning Class M 3200m and finished 10th in the State Open with a league leading 11:24.

Sophomore Liv DeStefano of East Haddam also improved dramatically after her 20th place finish last year.  The freshman had the fastest time in the conference running a 5:14 to take 14th in the State Open.

Not to be overlooked is last year's runner up Kelsey D'amico of H-K who earned a spot in the New England championships with her 24th place finish at the State Open.  While she was injured at the end of outdoors, she still was Class S runner up last indoors in the 1600m and will sure to be back on her game in the fall.

Team Previews- Haddam Killingworth only loses one of their top seven from their team that finished 10th in the State Open.  While the Cougars are never one to overlook their conference meet, they are sure to be aiming to move up from their 2nd place Class S finish and reach that elusive goal of going to New Englands as a team.

Old Saybrook and Lyme Old Lyme have enough returners and they should battle it out for 2nd in the conference and Class SS.  Coginchaug has enough up front to be in the mix with those teams, but they will be looking for their fourth and fifth to move up.