Sandra Diamond Fox will be profiling up and coming stars in Connecticut.  If you have someone on your

team that shows potential to be a future state champion, pass along their name and contact information to  mogden@milesplit.com

On Thursday, 15-year-old Taylor Ney -- a freshman at Coventry high school -- will be competing at the Class

S Track Championship in New Britain -- and he said he hopes to do well in them. If Taylor performs as well as he did at his most recent meets, he is sure not to be disappointed.
He has recently run a 2:08:08 in the 800 at the Old Saybrook Invite, a 4:27.33 in the 1600 meter at the Randy Smith Journal Inquirer Greater Manchester Invitational (first place), and a 9:49.66 in the 3200 at the Stafford Rotary Relays (second place). In addition, he ran a 4:37:01 at the New Balance Nationals Indoor and a 16:58 in the 5K at the CIAC State Open Cross Country Championships where he was the 2nd freshman in the field.
Taylor's running career began when he was in the sixth grade at Coventry Middle School.  "I was excited that they had a running program at Coventry Middle School," Taylor said.  "I ended up really liking it."
Now, in high school, his weekly training regimen consists of running 35 to 45 miles a week.  "We have two track workouts where we do interval training and core exercises almost every day.  We also work out in the weight room once a week," he added.
He makes sure to stretch as well as use the foam roller both before and after hard workouts.
"Two nights before a meet, I take an ice bath," he added.
He spoke about improving his diet since he has been on the freshman team.  "I've made better food choices and eat more healthy foods overall," he said.  "I eat a lot of lettuce and before a meet, I like to have oatmeal."
One of his proudest accomplishments so far in his high school career was setting the course record in 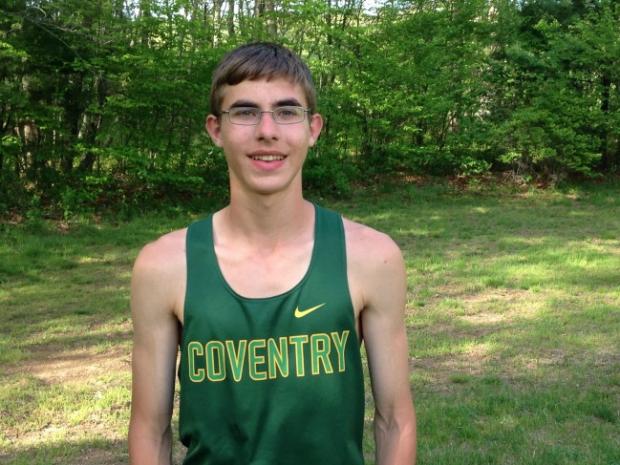 November for the cross country season, with a time of 16:58.
He spoke about his racing strategy when he PR'd in the mile in March  "I was pretty pleased with that time, it was a 4-second PR," he said.
For his strategy in that race, he tried to stay with the other runners until the very end.  "I let them take it out and tried to stick with them within kicking range for most of the race.  On the last lap, I picked it up and I kicked it and won it."
His favorite race distance is the 3200.  "It's an interesting distance. You need endurance, but it can also come down to a sprint at the end," he said.
One piece of advice Taylor said he received from his high school coaches -- Matthew Maynes and William Vanderrest -- is when put to the challenge, "you can always push harder than you may think you can," he said.
Also, he said it's important to remember the little things, which will help a lot in the long run.  One example of this is when he had knee pain at the beginning of the season. "Coach Matt told me to take it easy so it wouldn't get any worse.  So, I followed his advice, took my runs easier,  and my knee feels all better now," he said.
Coach Maynes sees a great deal of potential in his young runner.  "Taylor is fearless" he said.  It doesn't matter who he is up against, he is going to race them and he is going to try and beat them.  And based on how his season is going he probably will."
As for his role models, he said that it's the upperclassman on his team.  "They are all hard workers and they teach me a lot about running and being a good person in general," he said.
One of the biggest influences is teammate Connor Ratte.  "He is my mentor.  He helps to make sure we take it easy and to pace ourselves during a race."
Aside from running, Taylor plays the trumpet in Coventry's jazz band.  He earns high honors and his favorite subject is math and science.
Taylor's parents -- along with his two younger siblings, Connor, 12, Sarah, 9, are a great support in his running.  "They are always cheering for me, helping me do my best," he said.
Coming up for Taylor is the New Balance Nationals in North Carolina, where he will compete in the freshman 1600 and 3200 distances.
Taylor plans to have a long future in this sport. "I enjoy running with all the challenges it poses. I like to push myself to meet my goals and set new ones.  I hope to keep running throughout college and for the rest of my life."
Boys 3000 Heat 7 Yale Track Classic Jan 22, 2017
Tweets by @MileSplitCT