For those who have never had the good fortune of seeing the inside of Coxe Cage, it's track and field's version of Hinkle Field House, Butler University's basketball venue, and the setting of the film "Hoosiers". A building that features ancient architecture by today's standards and an Ivy League "it's great because it's tradition" attitude, Coxe Cage is the perfect venue to watch some of the Northeast's best runners to have an old school slug fest. Spectators were treated to race after race of exciting action. So what is there's only four lanes. So what if there are no starting blocks on the infield, or there are barrel starts in the 400. It's track, you're supposed to be tough, be able to go with the flow of the event, and appreciate that, not too long ago, your predecessors had to run on a flat track here, and now you're flying around the steepest, fastest banks in the state.

Here is a blow-by-blow of the weekend, with an eye on the Championship races of the whole meet and a clear, unapologetic bias towards all things Massachusetts.

Sabrina Southerland of Benjamin Cardozo was due for an encore on Saturday, since her 1600 split in the DMR, a race BC would win in 11:55.96, the nation's fastest time to date, was in front of only half the crowd. BC finished 13 seconds ahead of distance powerhouse Tatnall from Delaware, and was a harbinger of things to come on the weekend for Southerland and the NY school.

Amity's Katherine Simon just seemed to get better and better as the completion  heated up, and she ended with a 4 foot win at 41'10.75", bettering Essex, VT's Essence Underwood at 37'10.5". Only Weymouth's Nostia Amazan(31'6') represented the Commonwealth, but fouled a strong 3rd throw that might have sent her through to the finals.

Brian Hoey (56'0'25") of Lowell proved that Phil Maia's team is more than just a collection of great distance runners. Hoey was just 5 inches better than Smithtown's Benjamin Bonhurst, and is a favorite to take the Massachusetts state crown in a month. 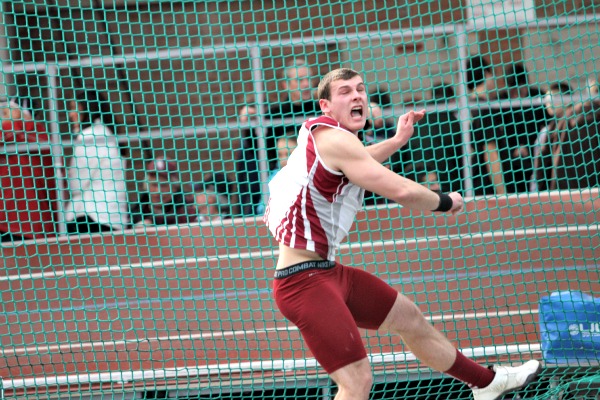 Taking the attitude that a 3K isn't to be run like a two mile, a race during which so many slog around the track, Clarence's Marissa Sanger (9:51.92), West Springfield's Caroline Alcorta (9:52.37), and Classical's Madeline Berkson(9:53.34) got the breakfast crowd to wake up in the seeded section. A tight race throughout, Saenger needed every bit of her last lap kick to take out this amazing field. Weymouth's Ashley Betts (10:24.08) ran a WHS record for 15th overall, and teammates Kacie Higgins (11:15) and Katie Leahy (11:17) ran personal best equivalents, when compared to two mile bests, as did Norwell's Lauren Humphries and Lexa Grasz.. 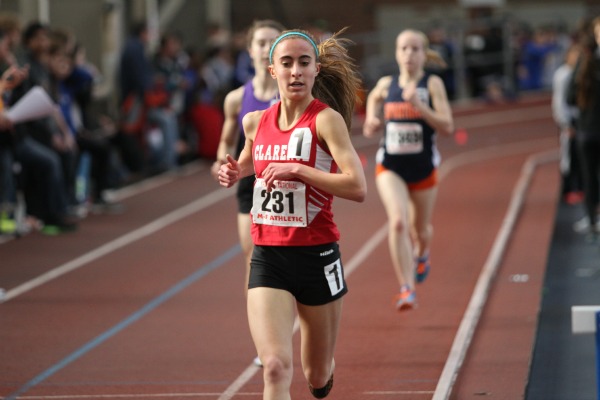 In a race that Newtown's Jake Feinstein heroicly led for several laps, before fading to 5th in the late-going, a three-man battle developed over the final laps. Rob Napolitano of Red Bank Catholic (8:37.96) slipped past Tony Russell (8:38.01) of West Chester, with TJ Hornberger of Lake Shore (8:39.13) closing fast. 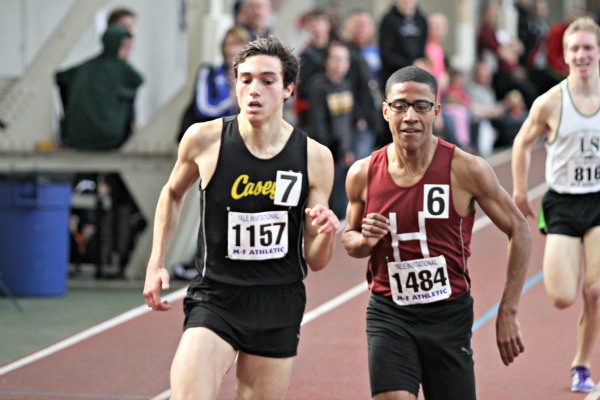 There were three over 10'6" in the vault, but only Colonie's Kara Snyder was able to do it on her first attempt, making her the victor over East Hampton's Amber Sekoll and Weston's Jane Wall. 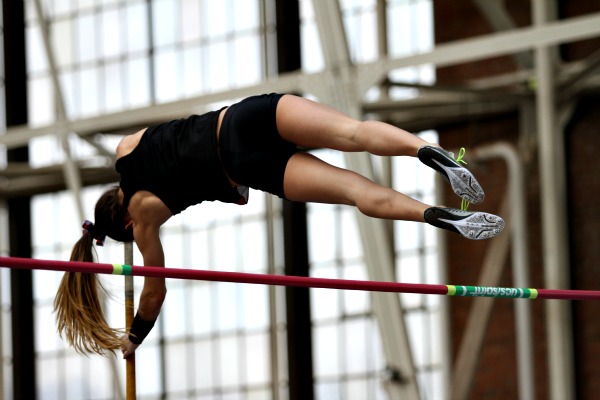 Fordham Prep's Sean McEvoy (14'0") was able to separate himself from a group of 8 others over 13'6" in a deep and hotly contested run at a pole vault title in the Cage.

Bay Shore could have camped out by the podium, as junior Imani McGhee had enough for the win in 18'5.25", 2 inches ahead of EO Smith's Amy Taintor. 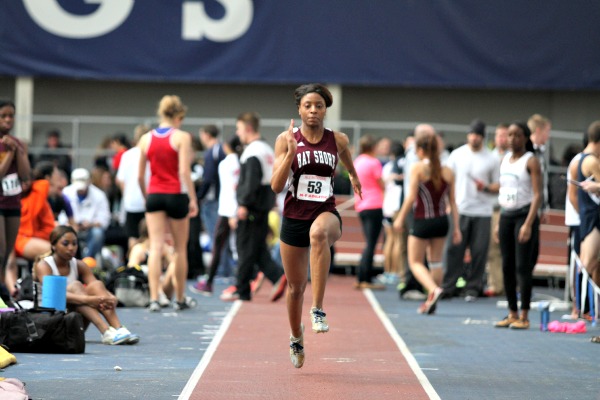 Perhaps the best battle on the day came from four long jumpers within two inches of the win. Bloomfield's Demario Gray (21'11.5") was just .5 inches better than Weston's Craig Shytle, and an inch better than Coventry's Lawrence Warwick. Hillhouse got back to the podium with Darryn Hormer (21'9.5") in 4th. 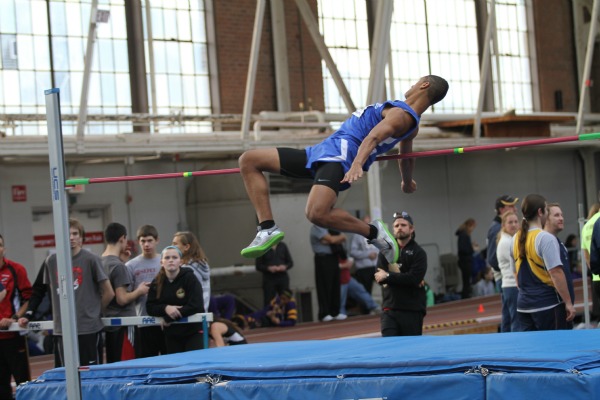 Bay Shore freshman Aviana Goode took the win at 5'5", in a high jump event that featured 10 girls over 5'1" and essentially ended the individual events of the meet. Jen Kimball was back at it, going 5'1", best for Mass. athletes, and taking several solid attempts at 5'3" in the process. 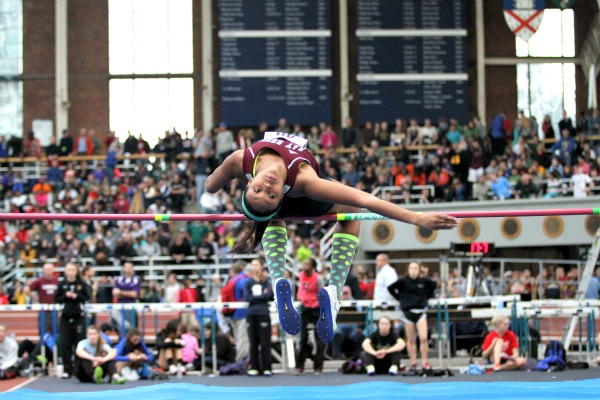 A pair of seniors battled to the finish, with Bishop Guertin's Betsy Garnick (8.28) having enough to lean past Benjamin Cardoza's Akayla Anderson (8.34). The next group was tightly packing in across the final hurdle, and Weymouth's Jen Kimball (8.82, 8.83) was the best Mass. finisher, breaking 9.00 for the 1st, 2nd, and 3rd times in her career on the day. 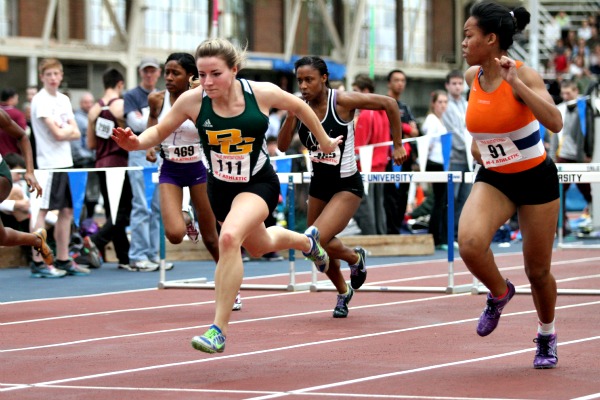 Isaiah McEwen of Bloomfield (7.67) simply dominated the rounds in the hurdles, executing a breathtaking finals race for the win. Mike Holder (8.20) of Lowell was the top Mass. finisher, making semis in the process. 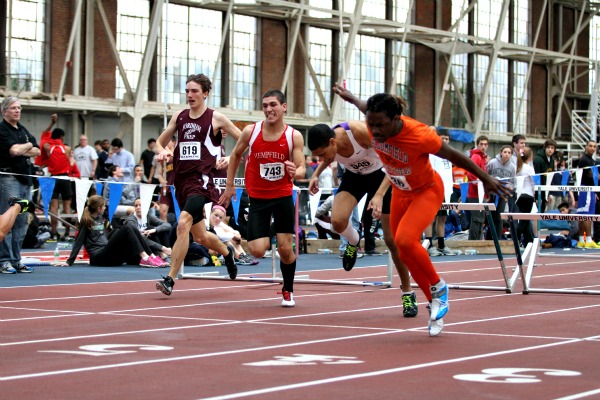 Hillhouse might get more press from Precious Holmes and the girls, but Harold Cooper (6.49) is about to make a name for himself on the national scene. He was able to outlean Bloomfield's David Campbell (6.51) in a photo finish. Lowell's Ryan Fitzgerald (6.92) made it through to semis as the top Mass. athlete. 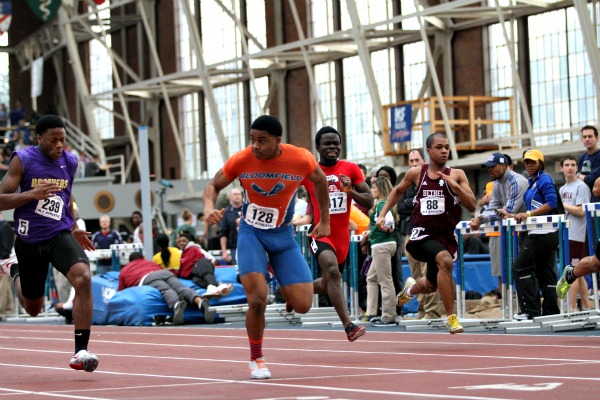 Taft's Kimberly Bailey (7.28) improved with each round, dropping from 7.43 to 7.36 before her impressive final race, outleaning and outlasting Hope's Quashira McIntosh, the best qualifier by just .05. Kerri Long of Weymouth was the top Mass. finisher, going 8.03, a personal best time, and one of many on the day for the Wildcats. 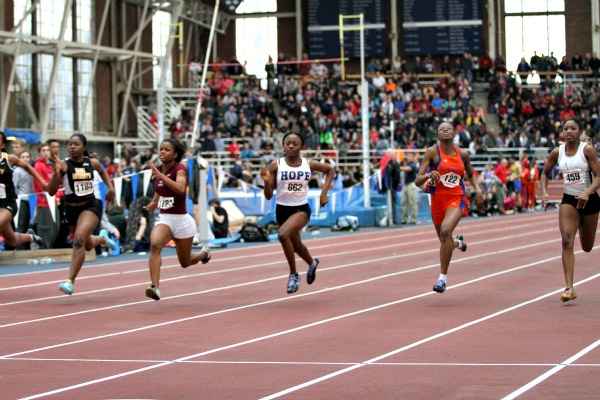 The winner of the 400 Meter run was Jared Delane of Northwest Catholic.  Burnt Hills-Ballston Lake's Rober Kirsty (51.03) was a hair better than East Lyme's Ben Ostrowski (51.13) and Lamar Gillespie (51.16). Ryan Fitzgerald of Lowell (52.13) was the best finisher from Mass.

Probably the only foregone conclusion coming into the weekend was that Precious Holmes, Hillhouse's superstar national title contender, would win her 400 meter race. The 55.22 time, impressive as it might have been, was surprisingly not as dominant a victory as one might expect. Holmes was given a stiff challenge from Deajah Stevens of New York in 56.35. Holmes also ran 39.49 in the CT 300 meters on Friday night, good enough for an easy win. Weymouth freshman Emma Sullivan (65.39) was the top local finisher in the race.

Deajah Stevens' Benjamin Cardozo HS teammate Sabrina Southerland got the win that eluded her partner, going a ridiculous 2:09.67 for the met record, edging a solid field that included Erica Johnson (2:11.57), Classical'sMadeline Berkson (2:12.14), NFA's Brianne Lenahan (2:12.64), and Bishop Guertin's Molly McCabe (2:13.10) in what is arguably the deepest 800 field in the country this year. Southerland simply ran from the front and never worried about opposing moves in a wire-to-wire victory. Tops from the Commonwealth was Weymouth's Morgan Fitzgibbon, whose 2:21.05 is a personal best and WHS record in a race that is rarely run indoors.

Using superior finishing speed to pull away from a stellar field, Farifield's Christian Alvarado (4:18.79) won the mile, a race loaded with Mass. talent. Sam Burrington of Brookline (4:22.46) was terrific, matching moves from the field and staying hear the top all the way, with Pat Coppinger in 6th in 4:24.10. Owen Wiggins and Aaron Klein made the seeded heat as well, while Weymouth's Nolan Parsley (4:27.73) and Mike "Killa" Kalenoski (4:29.88) ran strong top-15 races out of the slower section. 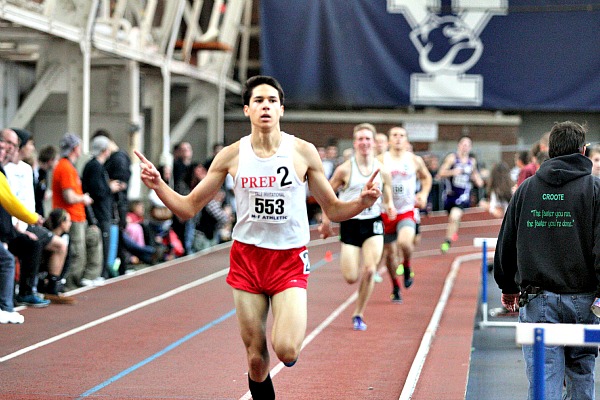 In a fantastic three-way race, Fairfield's Cate Allen (5:03.98) edged the Tatnall's Julie Williams (5:04.45) and Bryanna Allison of Lowell in 5:06.03. Allen had just enough to sneak past Williams at the tape, but Tatnall also put Reagan Anderson in the top-6, quite a feat in a deep field. Allison wasn't the only Raider to stun the crowd, as freshman Kaley Richards (5:18.72) went 33 seconds from the bell to defeat Weston's Abby Pohl (5:23.47) in section 3. Richards appears to be the next name in mid-distance running, coming off a great freshman XC season at Lowell. 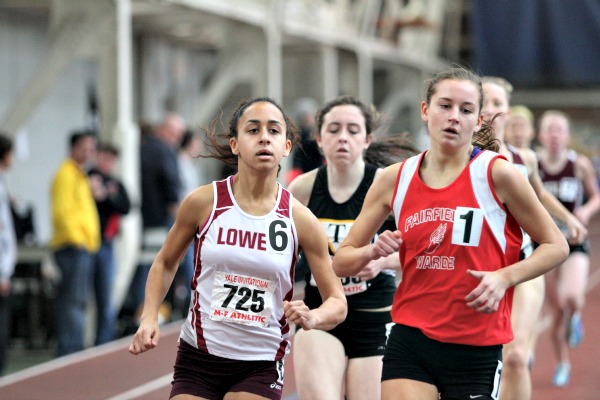 Uniondale (1:46.23) managed the banks and turns in the 4x200 better than anyone else, pulling away from Shenendehowa by just over a second. Hillhouse, not surprisingly, was able to keep the 4x400 trophy in state, running 4:03.33 to easily distance themselves away from Winsor, over 5 seconds back in 4:08.76. Hillhouse was far from done, as Precious Holmes returned to the track to spur a 9:34.84 4x800 time, keeping them ahead of Bishop Guertin(9:40.84), despite a blazing split from Molly McCabe.