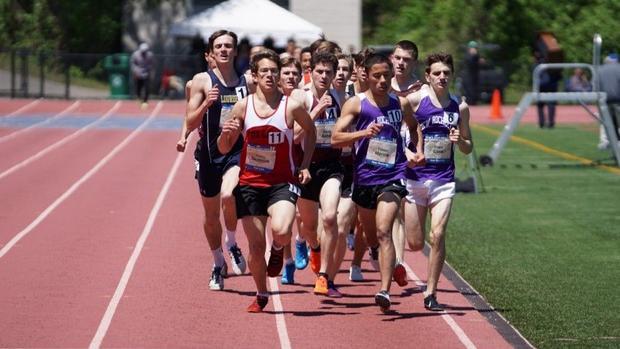 Of the 32 CT teams that signed up to compete in the Loucks Games in White Plains NY, 25 are still on board to show their stuff in a competition that will include athletes from as far away as British Columbia and a number of national powers. Weather is supposed to be pretty nice, so times and distances could be spectacular.

Among the top guys from CT competing at Loucks are Suffield's Timothy Watson in the high jump, Manchester's Aidan Puffer in the 3200 while teammates Sean Barkasy and Jamil Manu go in the 3000m steeplechase and long jump respectively, Greenwich's Andrew O'Donnell in the 200m and 400m and is joined in the latter by teammate Gianluca Bianchi, Hale-Ray's Sean Kennedy-Wonneberger in the 3200m, Fairfield Ludlowe's Steven Ditelberg and Bennett Hemphill will shooting upward in the pole vault, EO Smith's Jack Mattingly goes in the 800m, Xavier's Eamon Burke will be in the 3200m, New Milford's Collin Walsh seeks a CT #1 in the 3K SC, Staples' Benjamin Lorenz, Zachary Taubman, and Rory Tarsy will be taking on the mile, Ridgefield has a lot going on between Thursday's distance medley relays then individual events with Steven Hergenrother and Ben Mickool, and Hall's Jonathan York, Tobias Ruffo, and Walker Beverly will be in the 400m, 800m, and 3K steeple.

For the girls, one of the big highlights should be Joel Barlow's Mariella Schweitzer getting the chance to use her hurdling and jumping abilities in the pentathlon. Fairfield Ludlowe's Anna Keeley will be leading the CT's distance contingent while teammate Tia Stapleton will going in the high jump and triple jump, Greenwich's Kaitlyn Fay vies in the sprints while Esme Daplyn takes on the 800m and mile combo, Staples' Francine Steven appears to have enlisted for the 100-200-400 trio, Trumbull will have Kali Holden and Katie and Evelyn Marchand taking a stab at a distance event, Weston should see great results from Shea Greene in the javelin and Ellison Weiner in the PV, Windsor's big group will be led by Shani Smith in the 100H and 200m, New Milford's Madelaine Sweeney will swing in the 3200m, and Darien will have Julianne Teitler and Mairead Clas in the distance events.

Cheers to all in a fantastic three days at Loucks.