Seven runners finished within six seconds of each other in Class LL's girls 1600m in June 2017, and the final 20 meters saw surges back and forth before the outcome could be written in the books. The race had it all,  with final lap charges, a freshman blasting from 7th to the lead, and in the end the favorite sporting the number 1 hip number would get the lean for the win.

Glastonbury junior Erin McGill was really more of an 800m devotee, and at that distance she would go undefeated in CT and finish 13th at New Balance Outdoor Nationals  in a very nice 2:13.94. But she also could churn out a very respectable 1600m also, and she came into the Class LL championship seeded #1 off of a 5:04.31 she laid down in the CCC Central league meet.

But there was also a group of younger runners who were ready to start making big impressions as the postseason began. Danbury sophomore Lauren Moore had already run 5:08 and was ready to battle at the top, and freshmen Kate Hedlund of Manchester and Zoe Harris of Greenwich were also looking very promising

The 1600m went through many twists and turns and a blizzard of inspiring cliches before McGill got the win at 5:09.21 by 0.16 on a final surge over Hedlund, who had sprinted around from 7th at the bell to briefly claim the lead. Moore was close behind in 3rd, and she was followed in a few seconds later by Fairfield Warde senior Gabi Galetta, Ridgefield sophomore Gabriella Viggiano, Trumbull senior Katelynn Romanchick, and Harris.

A few days later at the CIAC Open, seniors Mia Nahom of New Milford and Katherine Deloreto of Tolland would finish 1-2 in the 1600m in just under 5:00 and Hall freshman Jenna Zydanowicz right on their tails. Moore would be 4th, Hedlund 6th, and Viggiano 8th. 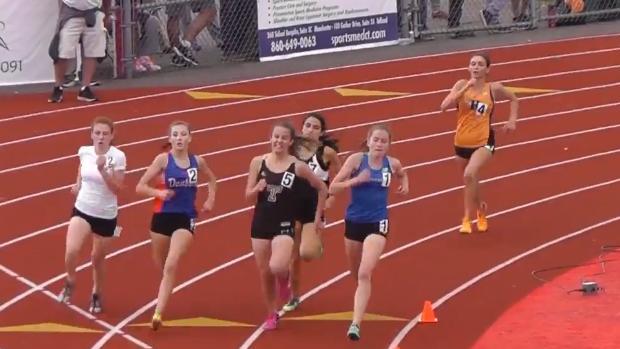