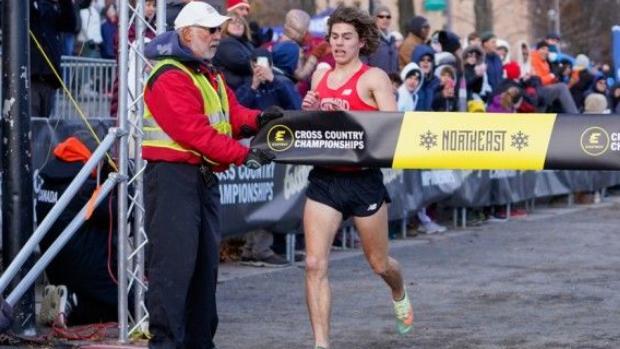 Two weeks ago Gavin Sherry of Conard won the Eastbay Northeast Regional in a meet record time that equated to a 200.07 speed rating that placed him at #4 in the nation behind the top trio from the Newbury Park team. Last weekend the NP guys dominated at the RunningLane Championship that saw not only the team's top 3 of Aaron Sahlman and Leo and Lex Young push their ratings higher above 200, but the 4th and 5th place finishers, Zane Bergen of Niwot (CO) and Riley Hough of Hartland (MI), also posted ratings higher than Sherry's. The track event style meet exploded with huge times and ratings, as Sahlman's winning time was 14:03.29 and the top fourteen finishers earned speed ratings above 195.

Though no guys from Newbury Park will be at the Eastbay Nationals meet in San Diego on Saturday, Bergen and Hough will be there, along with three other runners who competed at RunningLane's team-focused event. Eastbay lines up 40 of the top individual runners in the country, and the winning time will likely be a lot closer to the 15:08.8 that Josh Methner ran to win Foot Locker in 2019 with a super 201.07 SR than Sahlman's RunningLane mark this year.

Four main favorites have emerged for the Eastbay win, Marco Langon of Bridgewater-Raritan NJ who finished about 4 seconds behind Sherry at the Eastbay Northeast Regional is also in the group of four guys who have an overall speed rating of 199 on the year. Both Sherry and Langon will be going to the line after a two-week break from competitions, while Bergen and Hough just ran to the max last Saturday. So who has the advantage? Does running in the "team Nationals" (NXN from 2019 back) and then the "individual Nationals" (FootLocker previous to this year) give you an edge or take the edge off during the second race?

There's no easy answer to the question, and the circumstances for the runners who have doubled up in past years varied, as a few were members of teams competing at NXN though the vast majority were at-large runners. Maybe you concentrate more on NXN as a team runner? The conditions at Balboa Park were usually much more favorable for Foot Locker than they were in Portland for an often mucky NXN. Running at NXN seems to have worn down a few runners over the years so that FL was the coup de grace, but for others a less-than-stellar NXN was followed up by a big performance on a sweet and dry Balboa Park course.

There's also no fool-proof way to tell whether the second stop on a runner's Nationals double has been helped or hurt by the first race. If a guy has a 185 SR at NXN and then zoomed to 190 at FL, you might say he got a boost from his "warm-up" at NXN. But what if that guy was at a 195 SR going into December? Was doubling then a mistake?

We include the data for 25 Nationals doublers from 2017 to 2019 in the tables below, showing their pre-Nationals top mark, the NXN SR, and then the FL SR. The 2016 data would have also been included except that the results were off-the-charts unusual as a sloggy NXN was followed by an FL that saw seven guys propel themselves way way way up to incredible times and 200+ SRs. That can happen when the conditions are perfect in San Diego (as they are expected to be 2021) and the competition is outstanding (ditto for 2021). But even in 2016, a couple guys crashed. And since 2016, only Methner in 2019 reached a 200 SR.

The data for the runners includes their top speed rating prior to Nationals, their marks in the two races, and then the differences between the pre Nationals SR and the marks in each race.

The averages for the differences are all negative but not hugely so, as the Pre-Nats to NXN average difference is -1.95, the difference from Pre-Nats to FL is -2.90, and there is also an average drop of -0.64 from NXN to FL. So it's pretty much a wash for the Nats doublers since you are starting with the highest mark of the year taken from many meets for some high-flying runners who have a much greater opportunity to sink their marks with an off-day than to improve them with a great day. Throw out the marks from a few guys who had big crashes and the results for the guys are nice enough. And even if like Danny Kilrea in 2017 you just basically hold steady during the Nats double, you still can get a 5th at NXN and a 3rd at FL, which is none too shabby.

Also to note, doubling at Nationals was mainly an option for runners outside of the Northeast who often had their NXR and FL regional meets a week or more apart. Only Mendham NJ's Jack Jennings got the double invite in recent times from the NE, but not necessarily for the best result as two trips to the West Coast are toughies.

Sherry and Langon, Bergen and Hough, and 36 other runners including nine who are within striking distance of the top spot with 193+ overall SRs -- Tyrone Gorze, Kenan Pala, Gitch Hayes, Myles Hogan, Shane Brosnan, Aidan Puffer, Izaiah Steury, Kole Mathison, Sahil Dodda -- will all be fighting it out with whatever they have left.