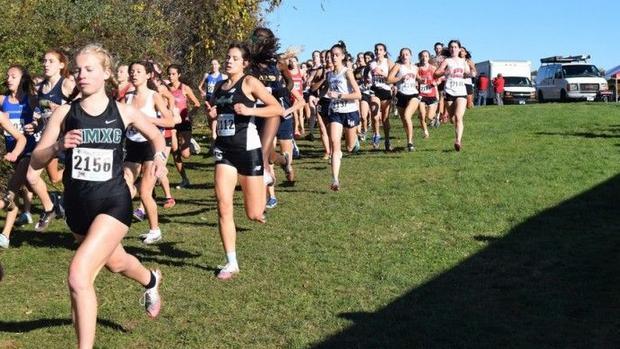 On Friday, November 5th, just four days after the CIAC Divisional meet had its makeup day following a waterlogged Saturday, CT's top teams got together again to run for the Open title. What to expect from the teams on short rest after the draining Class competitions was anyone's guess.

The answer turned out to be astounding. Of the six top teams on each side for the boys and girls heading up to Thetford VT for the New England Championship, all improved their average time at the Open, and all of them lopped double-digit chunks of seconds from their results. The top 6  boys teams averaged a 37.6 second improvement, while the girls were at 45.4. A common refrain in the interviews of teams whether they won or not was, "We gave it everything, and everyone on the team got a PR."

True, the New Milford girls champs' gigantic 57 second shedding of average time was partially due to the return of captain Claire Daniels to the lineup, but the five scorers from the Class L race -- Sydney Kelleher, Madelaine Sweeney, Mya Morabito, Isabel Greene, and Kat Taborsak -- averaged a 34 second drop among themselves at the Open. Maybe the course conditions at Wickham Park were a little better on Friday than on Monday, but that was just a part of it. And yes, the Open is more competitive than the Class races, but two years ago only champ Tolland among the top six boys teams improved on its time average (by 1 second), and four of the teams were much slower at the Open. On the girls side in 2019, the top two teams Hall and Simsbury were a little improved, but most teams fell back.

So Friday was a remarkable day that saw a shuffling of the deck on both sides when comparing team results from the Divisional meet to the outcome at the Open. On the individual side, there was little that was unexpected. Conard's Gavin Sherry ran the third-fastest time ever at WP in 15:16 behind only Alex Ostberg's Open and New England meet marks seven years ago. Callum Sherry was just 6 seconds in back of his brother , and Manchester's Aidan Puffer and Newington's Michael Bolke were a few seconds further back, all placing within the top 9 times in the WP record book. The high flyer on the girl's side was Somers' Rachel St. Germain with the 10th fastest time ever at WP as she won by 46 seconds and led her Class S team to a very nice 11th place.

The Ridgefield guys had the fourth best results in the Divisionals, but in the Open they almost matched the New Milford girls' improvement as they averaged 52 seconds better. The Tigers' Steven Hergenrother, Matthew McDonoough, Jack Dovaras, Ben Mickool, and Henri Vieltojarvi got a pack in between 10th and 38th and a meager 39 second 1-5 split. As pre-race favorites, Xavier and Hall had almost the same speed ratings coming in and the same going out, as the Falcons and Eamon Burke edged the Warriors and Walker Beverly by 2 points for 2nd place. Staples led by Zachary Taubman used a slightly better compression to edge Jack Martin and Carver Morgan's Avon team by 1 point. Daniel Hand earned the final spot at Thetford by taking 6th.

On the girls side, Glastonbury had the top results at Divisionals and improved its time average by 31 seconds at the Open led by Brooke Strauss's 2nd place. It still wasn't enough to hold off New Milford's charge led by Sydney Kelleher in 3rd place, a fraction behind Strauss. Hall beat out Ridgefield for 3rd by 7 points using a much tighter compression. And if any team could rival New Milford for its Open enthusiasm it was EO Smith, which improved its average time by 61 seconds to move past Guilford for 5th.

But enough with text and blather, as data tables are worth a zillion words. As always, the speed ratings (SR) cited here are the best way to compare team and runner performances at various courses under different distances and conditions, for instance at Thetford for NE (coming up shortly).