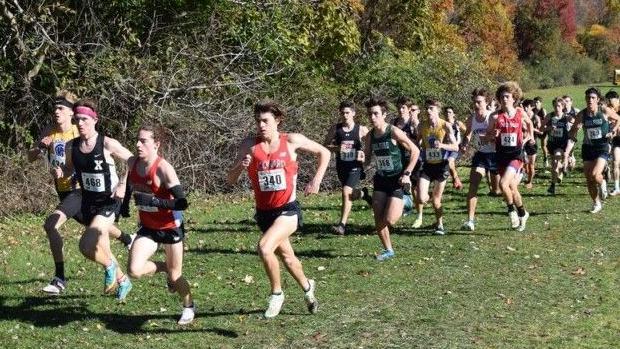 Manchester CT.  After the postponement of CIAC Divisional meet from Saturday to Monday, teams and runners at last got to compete for their Class titles and qualifying spots at the Open. The champions are highlighted below.

On the guys' side Gavin Sherry of Conard posted the best time of the day at 15:25 in the Class L race, while Rachel St. Germain of Somers got the best time for the girls at 18:42 in the smallest S class race.

Moving on to the Open on Friday are the top two teams from each class race shown above along with nine other selected teams for boys (total of 21) and eight more for the girls (total of 20). We have broken down the field for the two Friday races on the following pages with a listing of each team's average time for the 1-5 runners, 1-5 split, and historically based speed rating from Monday's races. Teams naturally want to lower their average times, and generally a lesser 1-5 split is better (pack team mentality), but they want to increase their speed ratings. And yes, speed ratings have become a highly valued method for analyzing XC performances in the modern era, though some sports writers do prefer to stick with their age-old raw 5K time average in the belief that all 5K courses are basically the same.