Without a track to train on, the Derby boys thwarted Bloomfield's attempt to sweep the boys and girls track title at the Class S meet, Thursday night in New Britain. 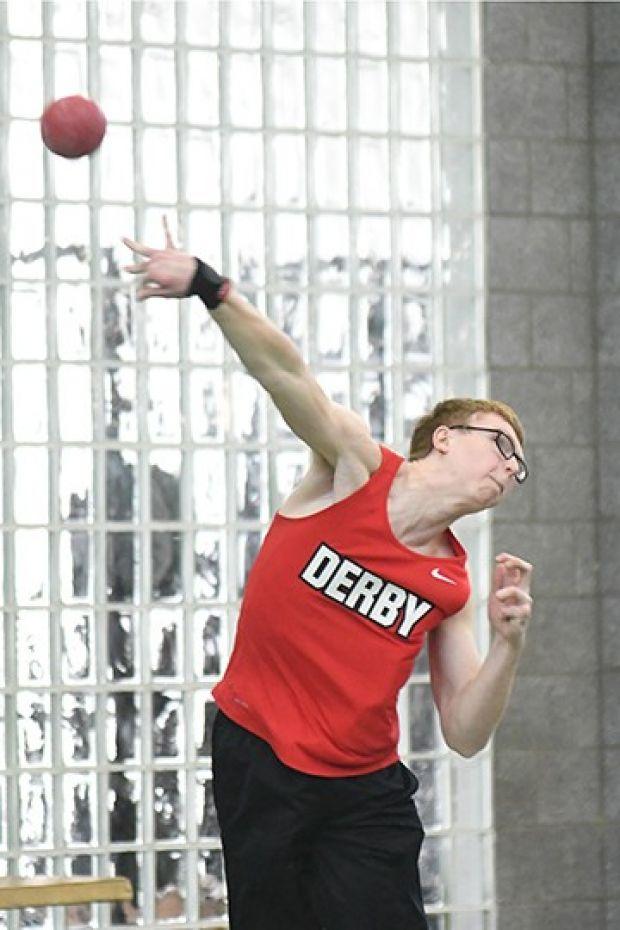 shot,  discus and javelin throws.  Winning any throwing event as a sophomore is a very rare accomplishment as the throws are usually dominated by juniors and seniors who are stronger and have longer to work on their technique.  Then, to sweep all three throwing events is also rare.  But to repeat the same accomplishment shows a special type of athlete.

"I believe throwers have the ability, but not sure if they have the desire to do it" said Bloomfield throws coach Damian Larking about winning all three events.  "It takes a lot of time and commitment to master the three movements."

For this great accomplishment, The Red Raiders were accompanied by a police and fire escort when they arrived into town.  Sirens were blazing and cars moved over as they arrived on Route 8 to honor this team that has done so much for "Connecticut's Smallest City."

Whereas Derby had five athletes contribute 80 of their 115 points, runner up Bloomfield used 16 different athletes to score 104 points.

Jaylon Nealy who ran 22.47 in the 200m and Sean Dixon-Bodie  who leaped to 46-7.25 were the only the two champions for Bloomfield, but they made up for it by scoring 23 different times.  And the best part if you are a War Hawk fan is that they only graduate two of their point scorers from this year's team.  The future is bright for the blue and orange.
In other events indoor national long jump champion Dyshon Vaughn of Career Magnet was five inches off the meet record with his leap of 23-04.25.  He is hoping to get back into the 24s by the State Open on Monday.
It used to be rare to break 43 seconds in the 4 x 100m in Connecticut.  Holy Cross of Waterbury became the 10th team to do it in the state this season when the team of Marckens Auguste, Marckenslee Auguste, DeAndre Wallace and Shawn Austin ran 42.97 and qualified for New Balance Outdoor Nationals emerging elite meet in North Carolina.
Tweets by @MileSplitCT