Sandra Diamond Fox will be profiling up and coming stars in Connecticut.  If you have someone on your team that shows potential to be a future state champion, pass along their name and contact information to  mogden@milesplit.com

On a recent Friday at the Stafford Rotary Invitational, 15-year-old Nick Sinofsky achieved what's astonishing for a freshman -- he broke two minutes in the 800-meter race.
In a recent interview, Nick reflected on his race.  He said he knew he had a good chance to break two minutes on the Tuesday before the invitational. 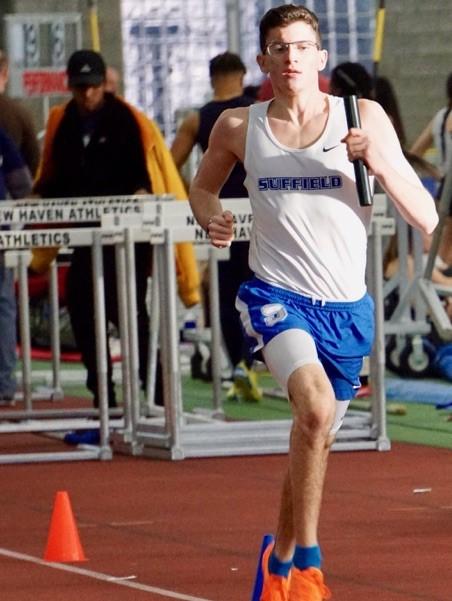 "We had a dual meet at Coventry High School and I raced the 800 against Connor Ratte, a senior.  He's one of the best runners in the state," he said. On that day, Connor beat Nick by mere three-quarters of a second.
Nick then developed a strategy for the invitational. "I knew I needed to stay up with the top group. If I'm able to get out quick, I would have the best shot at running a sub 2," he said. During the race, a top pack of three or four boys was way up front, and Nick led the entire race.
Since Nick broke two minutes, his said his self-confidence has improved a great deal. "Now that I can conquer that 2-minute barrier, I know I can run low twos a lot more," he said.
How It All Started
When Nick started the sixth grade at Suffield Middle School, he joined the cross country team.
"For the middle school track championships, I won the 800.  That distance has always been my focus," he said.   Nick has also seen success on the trails in the fall as middle school cross country champion in 2015 and he earned All State by finishing 3rd at the Class M cross country championships this fall as a freshman.
Now, as a member of the high school team, he feels his running has been taken to a whole new level. "Our distance group, led by Coach Domenico Casolari, has a really good bond.  We all push each other.  We help everyone who is running get the fastest time they can. We have a really good team mentality," he said.
Nick's team has three or four workouts a week with a few long runs mixed in, of 8 to 10 miles.  They run  25 to 35 miles per week.
A person who plays a special role in Nick's life -- and especially in his running  -- is his mother Pam.
Pam was a high school runner as well.  She earned many trophies running for her high school team at Frontier Regional School in Massachusetts, Nick said.
"My mom always comes to my track meets. No matter how loud it gets, she's the one voice I can hear cheering out of everyone in the crowd: "Go Nick! Go Nick!" Her voice motivates me to keep going."
Nick's role model in his sport is 1970s Olympic star Steve Prefontaine. "I feel like I run like him. One of his racing strategies is to go out as hard as you can and make it painful for the other person," he said.
How Nick Does It
His post race recovery includes the BodyArmor sports drink and stretching with a foam roller.
Nick's pre-race diet regimen consists of hard boiled eggs for breakfast on the morning before and the morning of a race.  Then, on the night before race day, it's pasta with red sauce.
The best advice Nick was ever given is from coach Casolari  "He always reminds us that we are running for the team, and to make sure we give it our all."
What's Next? 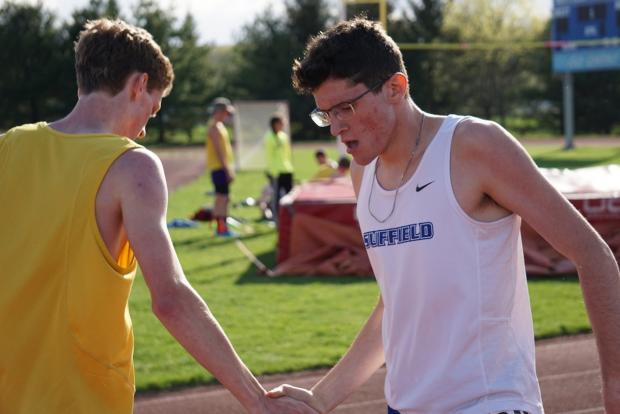 Now that Nick has achieved his goal of breaking two minutes, he has set his sights on his next goal -- he wants to try to break Suffield High School's 800 record.  The record was set in 2012 by former student David Determan, who ran a 1:56.

"I think it's very attainable," he said, adding that he would love to see his name listed on one a wall near the Suffield High School track, alongside the record holders for every event.
"There is a pump house out by our track near the school and on one of the walls, it lists all the names of the record holders for every event.  I would love to see my name on there," he said.
He feels that one of his running strengths is having a strong finishing kick.  "When we get to the 200-meter mark, I can dig into that extra gear," he said.
He said he's never afraid to get out of his comfort zone.  "I push myself as hard as I can go. Every time I finish, I'm just dead," he said.
Nick's next race is the Randy Smith Journal Inquirer Greater Manchester Invitational on May 20, where he will run the 800 once again.
Other goals he has is for the 1600, where he would like to come close to the 4:30 mark.  Reaching that goal would qualify him for New Balance Outdoor Nationals in the freshman mile.  His current mile PR is 4:43:26.
Boys 1K Finals Section 2 - seeded trackside CIAC State Open Indoor Feb 23, 2020
High School Boys' 1k, Finals 2 CIAC State Open Indoor Feb 22, 2020
High School Boys' 1k, Finals 2 CIAC Class M Championships Feb 15, 2020
Championship Boys 1 Mile Finals Section 1 Yale Track Classic Jan 13, 2020
Seeded Boys 5K Wickham Park Invitational Oct 12, 2019
Boys 1600 Finals Section 2 CIAC Class M Championships Feb 10, 2019
Tweets by @MileSplitCT