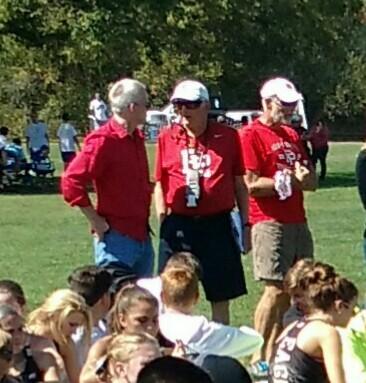 When Fairfield Prep's Drew Thompson crossed the line in tenth place two weeks ago at the Footlocker Northeast Regional meet at Van Cortlandt Park and qualified for the Footlocker National Cross Country Championships, he accomplished what thousands of high school runners have dreamed about the past 37 years.  Qualifying for "Footlocker" is a dream come true for the top 40 boys and girls cross-country runners in the nation and comes with an all-expense paid trip to San Diego, California. They get to rub shoulders with some of the best professional runners in American and meet their peers, who all aspire to reach the highest level of the sport.

Thompson, who finished 35th in a time of 15:52 on Saturday, has been coached by a father-son coaching duo, Robert Ford Sr. and his son, Robert Ford Jr., who have guided the Jesuits for the past three decades.  The Fords have a unique coaching relationship where they play off each other's strengths and weaknesses.  Ford Jr. is the Xs and Os guy who sets up the workouts with his background as a science teacher.  The elder Ford is more "grandfatherly and offers a personal connection." according to his son.  Ford Sr. offers the day-to-day connection throughout indoor and outdoor where Ford Jr.'s teaching responsibility makes it impossible to make practice every day.  Both are always on the same wavelength and collaborate often.

This collaboration has brought success that no other school in Connecticut. and few in the country. have attained.  With Thompson making Footlocker on Saturday, that makes the fourth boy from school to make it and the sixth time the Fords have made the trip to nationals.  In 2014, they were named Coach of the Year by Footlocker.

"Footlocker does a great job with all of the athletes", Ford stated.  "When we get there, they have a meeting and they talk about how we are all here for the kids.  Once we arrive in San Diego, they take care of them from there."

Their first Fairfield Prep athlete to qualify for nationals was Brian McGovern, who finished 15th to earn All- American honors in 1999.  He qualified again his senior year by finishing second in the Northeast Regionals and 17th at Nationals.  The two-time New England champion, who also earned All-New England four times came from a running family and grew up competing at the Junior Olympics and road races. McGovern came into high school with experience and talent.  Ford stated that, "Brian had the ability to communicate with me in ways that helped me as a coach."  McGovern took his considerable talent to the University of North Carolina where he became captain of the team and later worked for Nike for many years after college.

McGovern ended an eight-year drought for Connecticut athletes.  The only other Nutmeggers to qualify in the 90s were National Champion Liz Mueller of Waterford and Erin St. John of Bethel in 1991.  Since McGovern's breakthrough, there have only been two years where a Connecticut athlete hasn't made the finals.

Since 2011, the Fords have attended the meet four of the past six years with Fairfield Prep athletes.  The second Prep boy to make it was Connor Rog. who finished 18th that year.  Ford felt Rog "had the ability to empty his mind about everything but that race he was running." Rog was a three-time All New England athlete, who won the State Open and led his team to the State Open title in 2011.  He was known for his tough, front-running racing style and finished in the top-10 at the State Open three times in his Prep career, with a runner-up finish his junior year before winning his senior year.

Rog ran for the University of Virginia where he earned All ACC honors and is currently finishing his NCAA eligibility as a grad student at Sacred Heart University in Fairfield.

The very next year, junior Christian Alvarado finished tenth at regionals after having a setback early in the season when he was diagnosed with a stress reaction in his left foot and found himself on crutches. This forced his coaches to become very conservative with his training and bring him along slowly.  Alvarado trained by aqua jogging, riding a bike and going to physical therapy to maintain his fitness. This regiment allowed him to return ahead of schedule. He won the SCC meet, but sat out the Class LL championships to save himself for the State Open.  Prep was good enough to qualify as a team and they reinstated him in the lineup where he finished fourth.  He then came back a week later to take ninth in the New England Championship.

But thanks to the patience of father-son randem, he continued his workouts and rounded into shape by regionals where he finished eighth.  While he finished a disappointing 39th at Nationals, it gave him the experience for the following year where he finished 20th overall in 15:47.  He continued his excellent senior year and later won the mile at the New Balance Nationals Outdoors championship with a time of 4:06.88.

Alvarado is currently running for Georgetown and has twice helped the Hoyas qualify for the NCAA championships in cross country where they have finished 10th and 21st the past two years.

Thompson, the latest boy from Prep to earn a trip to race in Balboa Park, finished only a second behind winner Zak Ahmed in both the Class LL and State Open Championships.  "Drew is a tough kid who is able to give 99.9 percent and go to the edge" says Ford Jr.  "He is a strength runner and we are working on his speed."

When asked what these runners had in common, Ford felt "all of them really wanted to go to Nationals and they wanted to take a shot.  All of them are good students and the qualities of a good student are the same as a good runner.  If you don't find reward in hard work, without immediate reward, you won't excel in school or running."