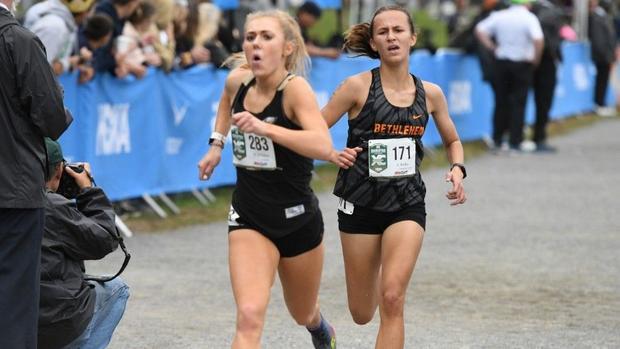 Over the last two weeks since the last TWTW/TWTB, CT teams have been battling on many fronts, including the huge Manhattan Invite at Van Cortlandt Park in the Bronx where Trumbull's Kali Holden (above, at left) finished an impressive 12th in the premier Eastern States race to lead her team to 7th in the race and 20th of all the teams in the Manhattan merge.

Altogether seven teams from CT were racing at Manhattan, and on the boys' side Xavier and Amity finished 10th and 16th respectively in the Eastern States race as the X-man came in  one place ahead of Xavier NY with a nice 158.8 speed rating and the Spartans finished with a 145.0 SR. Over in the F race, Danbury was 8th with a 145.4 SR and Trumbull was 11th at a 143.0 SR. Also in the running for CT's smaller privates were Greens Farms with a 114.0 SR and Brunswick at a 52.0 SR. Leading the CT guys was Xavier's Eamon Burke with a 15th in the ES race at a 178 SR. Other to runners from the ES and F races included Danbury's Devon Rosemark (166), Amity's Mason Beaudette (165), Trumbull's Mohammed Abunar (163), Amity's Parker Paragas,and Xavier's Alexander Ushchak (161).

Besides Holden and Trrumbull (86.4) in Eastern States for the girls, Convent of the Sacred Heart-Greenwich (50.2 SR) and Greens Farms (23.2) also were in action. Holden posted a big 113 SR for her run and teammate Evelyn Marchand got a 95 SR for a 33rd in ES.

Other assorted invites and other meets over the last two weeks include the following.

What's On The Horizon

The duals have been going full throttle around CT as we head toward post season. And yes there was a Mega meet down by the east shore leading up to Shoreline, but the conference meets are the big ones on tap going ahead. The sizzlers coming up in the next two weeks include: