past four years while the Immaculate girls have taken the runner up spot the past two.  Well the wait was worth it for both teams as Pompeaug won their first conference title since 2001 and Immaculate broke a four year drought in the winner's circle.

Individually, both Kate Wiser of Pomperaug and New Milford's Eli Nahom defended their titles (Nahom's 3rd straight) by large margins.  Wiser led wire to wire and destroyed her course record by 32 seconds, running 17:40 while Nahom stayed in the pack for the first mile and cruised across the line in 16:16. 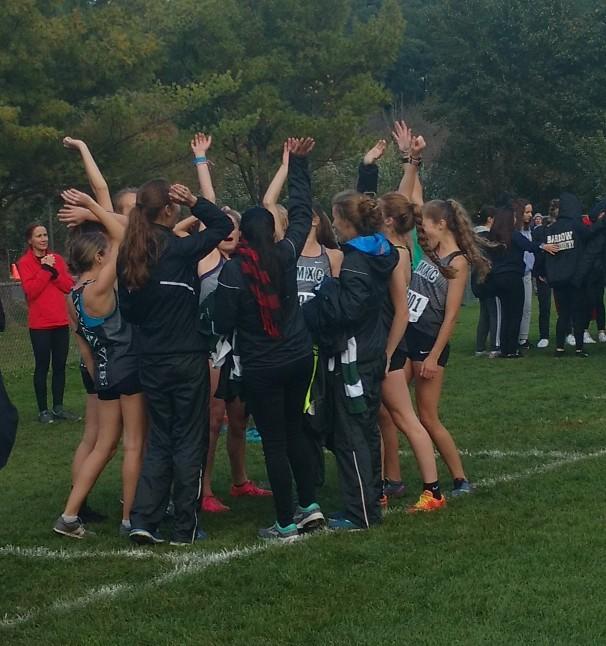 The course is named after former Bethel High cross country and track coach Mark Goodwin, who "retired" and is currently coaching the boys and girls cross country teams at Pomperaug.  He mentioned the number of alumni that stop by to share in the celebration and how excited all the runners and former runners were after they learned of their victory.  He stated "I guess we kept knocking on the door and they finally let us in"

"Each athlete gave it their all and ran significantly faster than they did only eight days ago when we ran this course in our dual meet" said the Hall of Fame coach.  "Watching our number one runner, Eric Rosenhein finish was like a scene out of Chariot's of Fire.  He was going in slow motion and barely got across the line because he was so spent."

The Panthers needed every one of those great performances because New Milford, who has won 16 titles over the past 20 years, were only four points behind 1st place.  The Green Wave was up by 13 points after their fourth runner.  But they were undone when their 5th runner Connor Delpha, who improved over 90 seconds from last year's SWC meet, finished 44th.

Brookfield, who finished 12-1 in the regular season was mildly disappointed with they took 3rd place and defending champion Newtown took 4th.

In the girls race, Immaculate, the smallest school in the conference used their superior depth to put five girls in the top 14 to score 53 points to defending champion Pomperaug's 77.  The Mustangs could have  scored even lower, but two time SWC champion and last year's runner up Angela Saidman, has been recovering from a cold and finished sandwiched between two teammates in 13th place.

"The conference has 3-4 teams that could be state champions this year", Goodwin observed.  Its been an up and down season for us but I was happy to see Maddie Villa back to where she was last year after a slow start to the season."

New Milford, who put four runners in the top 17, tied Pomperaug for the runner up spot but lost the trophy on the 6th man tie breaker rule.

New Fairfield, who had a few minor injuries earlier in the season are rounding their way into shape and took fourth, only nine points out of 2nd place.

Make sure to sign up for Milesplit Pro so you can watch video of the girls race below.

Take a look at the 2018 boys SWC championship race.