The 2018 cross country season opened up and all the summer work paid off for Connecticut athletes who competed in New York, Pennsylvania and within the state.

The  Haddad Windham Invitational is the traditional kick off for many Connecticut teams.  The winner of the Varsity 2 race was Jacob Smith of Glastonbury who ran a 16:25 to defeat Wilbur Cross' Travis Martin.  For Smith, who was 30th in the State Open last fall, this was his first major cross country win.

Suffield, who is one of the favorites to win the NCCC, squeezed out a narrow win in the Varsity 1 Race over Class M defending champion Tolland by a score of 68-87.  Senior Kyle Englander led his team to the victory with a sixth place finish.  The two teams were tied through the fourth runner, but Class M champion Killian McNamee finished in 38th place.  When McNamee returns to his normal form, the Eagles should have enough to challenge for one of the top six places at the Open to qualify for New Englands.

Also in the Varsity 1 race was Glastonbury, who is ranked 6th in the Coaches Preseason poll, took 3rd with 109 points.  In a surprising move top ranked Hall sat out Trey Cormier and Miller Anderson, their two top runners.  They still finished fourth, but would have certainly been in the mix for the win if they ran.

In the Boys Varsity 2 Race, Brookfield traveled across the state to take the victory.  The Bobcats were led by Jadon Parris and Daniel Finck who both ran 17:19 and used their 52 second 1-5 man gap to over take E.O. Smith 62-86.

East Catholic ran the Windham Invite for the fist time in several years, but their top runner Heath Olivieri 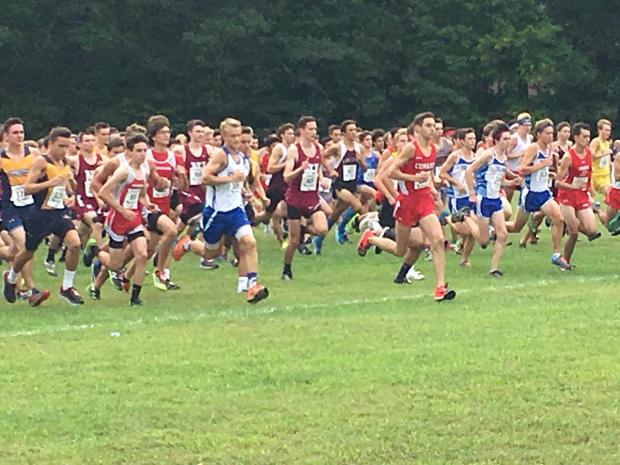 still managed to come away with the win in 16:22.  The senior was pushed to the fastest time of the day by Nonnewaug's Eddie Nicholas who was 2nd, 10 seconds behind.

Danbury boys traveled to Kutztown,  Pennsylvania to compete in the PTXC 10 Invitational to compete against   Loudoun Valley, the top ranked team in the US.  The Hatters had a 22 second spread between their 1-5 man and were led by Jack Watson who finished 25th in 17:04.  This type of close pack will be a huge advantage as they go into the championships meets later in the season.

On Friday, many schools opened up with the Blue Dragon Invitational at Veterans Park in  Middletown.  Running on his home course, Matt Lecky announced he is a runner to be watched as he won in an time of 15:42 over the 2.87 course.  The senior finished 5th in the Class L meet last year and his time was 1:18 faster than he ran last year on the same course. His victory led Middletown to their third straight win in the invitational.