teams in both the boys and girls polls.

Hall returns Trey Cormier and Miller Anderson who ran 9:08 and 9:24 for 3200m and helped their distance medley relay team earn All American at New Balance Outdoor Nationals.  While they wanted more than just their 6th place finish at last year's State Open, this could be their year move up to accept an award on the stage at East Catholic High School.  They return five boys who have broken 10 minutes in the 3200m along with two others who have run 10:05 or better.  With the combination of two legitimate front runners and plenty of depth, the Warriors are looking strong this year.

What can be said about Xavier that hasn't already been said?  At Nike Team Nationals, they finished 18th, 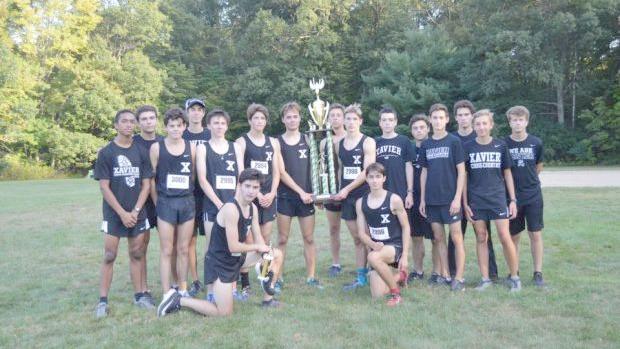 and four athletes from last season's top seven return this fall to earn them a number 16 ranking in Milesplit's national poll. Their top four returners are basically interchangeable.  They had a strong JV last year as well and if their fifth man can get close to their pack, their team could move up the MileSplit50 rankings pretty quickly this season.  But first they have to get through strong teams from Hall and Staples.

Last year Staples defeated Xavier in the Class LL meet and only lost the Open on a 6th man tie breaker.  Even though the Wreckers graduated six of their top eight finishers from the FCIAC championships, they return a strong JV team who shouldn't miss a beat.  Their top five returners are all under 10 minutes for 3200m and while the faces may change, the results could very well be the same this fall.

Danbury did not have a lot of returners last year, but they still managed to take 7th at the State Open, only 13 points behind Hall's 6th place finish.  They return six runners who broke 17 minutes over 5k on the track and will be led by junior Jacob Hefele who ran 9:33 for 3200m during outdoor track and Malcolm Going who anchored their sprint medley relays to victory at New Balance Indoor Nationals.

Tolland is made up of mostly rising juniors and sophomores, but don't let their youth fool you.  They finished 8th at the Open last year and have five returning runners who have broken 10 minutes for 3200m.  They will be led by junior Killian McNamee who was Class M champion and qualified for New Englands last year.

Glastonbury is just one of those teams who might get overlooked in track but are quietly building up a decent cross country team. Junior Jacob Smith finished in 30th place in the State Open, eight seconds behind the all important top 25.  He will be joined by Sam Wilcox and Zack Smith who didn't score in the state meets but ran fast anyway. With six of their top seven returning, things could look bright for the Tomahawks.

Glastonbury graduated four of their top 7 but they are still defending State Open champions and are a perennially top three team that always seems to reload.  They will have Angela Braga and Grace Sparrow, two All State runners to lead them.

Danbury returns their entire top five and will be looking to move up one spot from their State Open runner up place last year.  They are led by New England 1600m champion Lauren Moore who should be in the top five along with top 10 finisher Alexandra Chakar.

Pomperaug went into last year's State Open as the top ranked team in the state based on their Class L championship but slipped to 3rd when Glastonbury ran much better at the Open and Danbury squeezed by them by only eight points.  But the good news is they return a strong top three including Kate Wiser, the State Open 3200m champion and Ivy Walker who was sidelined at last year's Open with an injury. 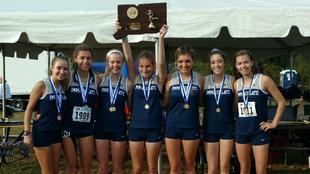 The Mustangs finished 10th last year at the State Open, but where only 15 points out of 6th place.  They return five of their top 7 including 5th place finisher, Angela Saidman and Taylor Mascetta who finished 3rd in the indoor state open 1600m race was a strong leg on their 4 x 800m.

Guilford will be led by Meredith Bloss who was 3rd last year at the Open and will going for her third straight top 25 finish.  The also return five of their top seven including sophomore Gianna Siciliano and junior Clara Wiesler from last year's fourth place team.

Trumbull girls never came close to cracking the top 10 in the CT Coaches Poll all last season, surprised many and took 6th place to grab the last qualifying spot for New Englands.  The future looks even brighter for the Golden Eagles as they return their top five including Alessandra Zaffina, who had the 8th fastest time in the state for 3200m as a sophomore.

For the complete poll, go to XC Poll Results.