Bloomfield girls graduated probably the greatest single class of athletes ever to come through the school (or any other school) last spring.  It looked like their streak of eight straight Class S titles would come to an 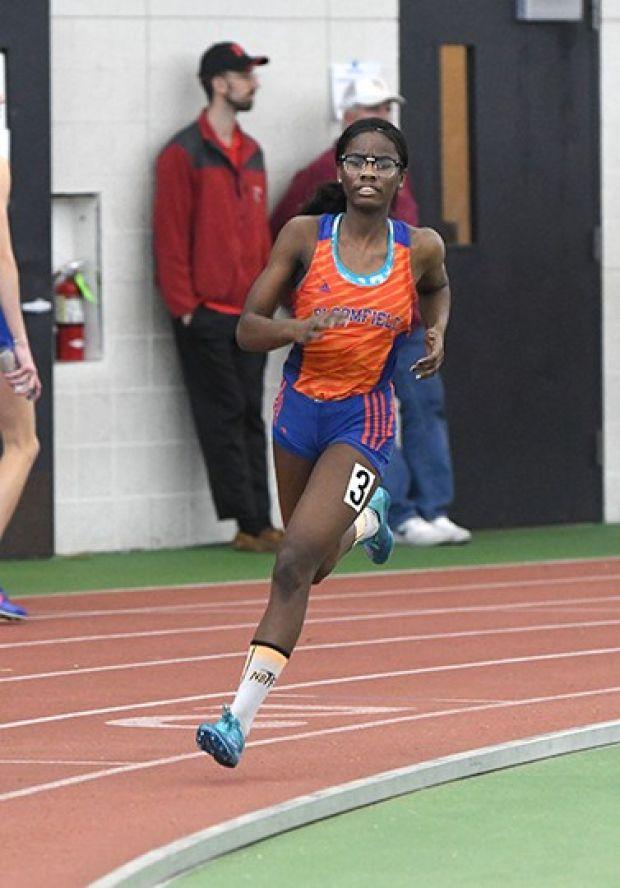 end.  But juniors Jillian Mars and their throwers refused to let the tradition end.  Mars won the 600m in a meet record time of 1:37.49, came back to win the 300m in 41.00 and finished off the evening teaming with Shenequa Campbell, Jahleah Harris and Jahlia Banton to anchor the 4 x 400m to a winning time of 4:07.46.

The shot putters stepped up to the challenge like many of their former teammates did before them.  Senior Justyce Wilson stepped up to win her first state championship with a throw of 37'8.5.  Right behind her was her teammate Alliyah Booth with a throw of 35'7.5 and fellow sophomore Otisha Williams completed the sweep for a third place throw of 35'3.  To add an exclamation point on the success of the Bloomfield throwers, Angelia Davis took a 6th place medal, throwing 32-02 to take four of the top six places and 25 points for the War Hawks.

While Saturday was more of the same for the Bloomfield team, Derby won their first indoor track state title.  Ken Little won the 1000m easily with a time of 2:34.56, a little more than seven seconds ahead of 2nd place.  He came back to anchor the sprint medley team to another victory and then ran a leg of the 4 x 400m to take 2nd place to take part in 28 of his team's 46 points.

The Red Raiders also got big points from their throwers.  Tristan Pruzinsky has made a big jump this year and has had three meets over 50 feet in the shot.  He saved his best throw for the championships and popped off a 51'8.5.  His teammate, Brian Jalowiec, who won the three throwing events at last outdoor's Class S meet as a sophomore, has battled injuries this season but still managed to take 2nd with a throw of 50'2.

Derby's Ja'kwan Hale was jumping 6 feet as a sophomore last spring but had improved to 6'4 earlier this season.  The junior had an amazing night and made a three inch PR with a jump of 6'7 to qualify for New Balance Indoor Nationals.

Career Magnet's Dyshon Vaughn popped off his third 23 foot jump of the season to break Josh  Fornier's 17 year old Class S record with a 23'4.75.  His performance on Saturday night was only one inch off his personal record which is currently ranked 13th in the country.