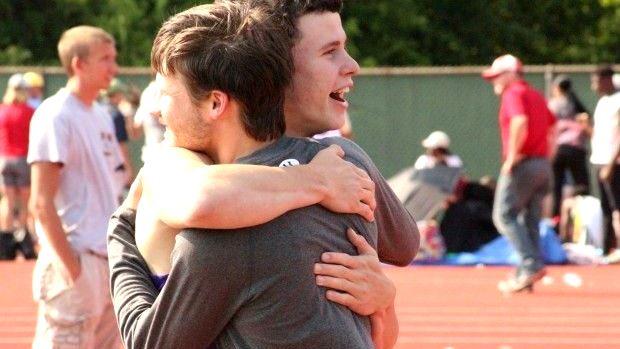 Danbury's Leland Roberts (gray shirt) congratulates Chris Rough after the Westhill star cleared a meet record of 16 feet in the pole vault to win the individual title at the State Open on Monday.

Up until 2006, no Connecticut pole-vaulter had ever cleared 15 feet in a competition and clearing 14 feet just about guaranteed you a State Open title. Then along came Jordon Thull of East Lyme and he shattered that barrier and set the state indoor record with a 15-3 and outdoor record with a 15-7 effort.

After that year, the floodgates were open and pole vault has taken off to unprecedented heights in Connecticut.

At this year’s State Open, the top three vaulters tied Thull’s State Open outdoor record of 15-6, but it was Chris Rough of Westhill who took home the gold with winning leap and meet mark of 16-0. He was followed by last year’s Open champion Joe Fogarasi and Ian Bergere of Daniel Hand.

When asked what has caused the sudden upswing in performances, all three credit each other for the competition they provide. 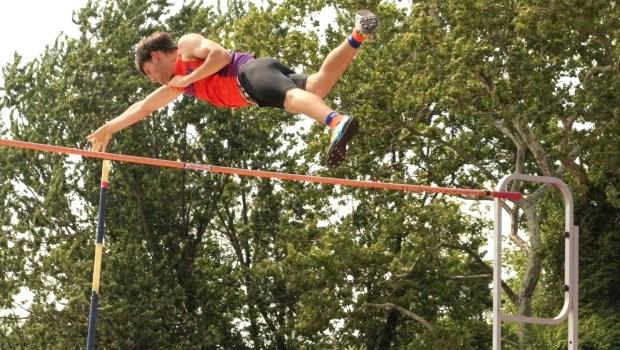 Rough, who earned All American status at New Balance Indoor Nationals this March by finishing sixth overall, explains, “We came up together since freshman year.” It helped that they all showed early promise and competed against each other at a high level in multiple invitationals and championship meets for the past three years.

Fogarasi, who is tied with Rough for the Connecticut indoor record of 15-10 added, “Everyone wants to win, which is motivation to work harder in practice.”

Bergere, the first to clear 15-6 at the Open, credits not only the competition, but the various coaches who have helped all three, plus countless other athletes. He has learned a great deal from Russ VerSteeg of Sky Jumpers in North Franklin, Conn., and Tim Murphy of The Running Academy at The Danbury Sports Dome. Both coaches, along with Tim St. Lawrence out of “The Barn” in Warwick, N.Y., train pole-vaulters from various schools and have had tremendous success, increasing the quality of performances in the northeast.

It is through these pole-vault facilities, athletes have learned the event and been able to be coached by specialist and have had access to a variety of poles. In fact, The Patriot Pole Vault Club out of Westborough, Mass., founded in 2000, even rents pole for a nominal fee. In 2006, both Sky Jumpers and Hudson Valley Flying Circus, out of The Barn, opened up. Connecticut athletes flocked to these facilities and many of the class, open and conference record-holders have trained with these coaches, in addition to the regular practice with their high school teams.

Murphy, the 2013 CHSCA Outdoor Track Coach of the Year, coached his son T.J. to the current Connecticut state record of 16-3.5 in 2012 before he retired from his position at New Fairfield. He attributes a great deal of his son’s success to the coaches at The Barn and traveled 90 minutes each way two to three times a week to help his son reach his goals. Wanting to stay involved in the sport, he volunteered at Danbury High and became a pied piper, attracting other Connecticut athletes over the border to New York, including four to six Danbury vaulters. It paid off that winter when Danbury sophomore Leland Roberts won the State Open. 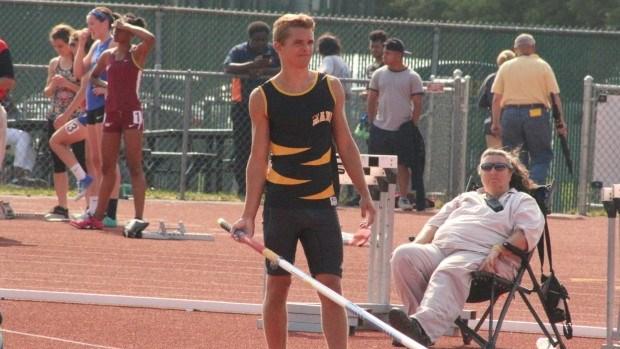 When the Danbury Sports Dome opened up in the fall of 2013, “Murp” saw an opportunity to offer specialized coaching in the event to Connecticut athletes without having to travel as far. This winter, fourth-place finisher Leland Roberts encouraged Rough, Fogarasi and Bergere to train in Danbury and the twice a week practices motivated all four to reach for greater heights.

The season is not done for these outstanding Nutmeg vaulters. Rough and Roberts will skip New England's, but Rough, Fogarasi and Berege will compete at New Balance Outdoor Nationals on June 21 and hope for another opportunity to push each other to unprecedented heights. After graduation, Rough and Berege will officially become teammates when they enrolled at UConn. Forgarasi will once again be a regular competitor when he competes for the University of South Florida, a member of the AAC and Roberts will compete at Houghton College.