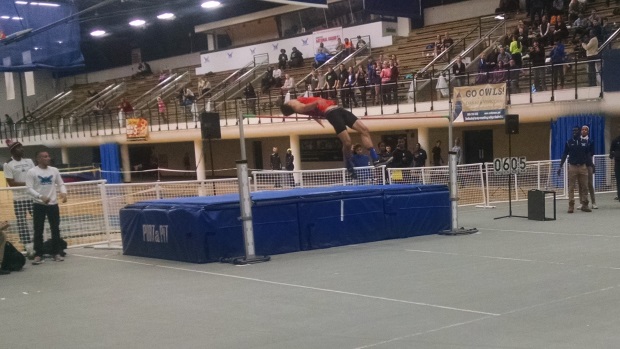 It’s been nearly 20 years since Southern Connecticut State University last hosted a high-level high school track meet but local athletes took advantage of the excellent facilities at Moore Field House in New Haven on Saturday to set some of the state’s leading performances at the inaugural Wintergreen Invitational.

Leading off was Danbury’s Mike Morrow (see above photo), who set a new school record and the state’s best performance by winning the high jump with a leap of 6 feet, 5 inches. This improves his best performance by three inches and is his third jump over 6 feet this season.  Previously tied with three other jumpers for the state’s lead at 6-2, he said he “made a decision I was going to clear it” when he made his attempt at 6-5.

On the girls’ side Hillhouse senior Alethia Moore blazed to a personal-best, winning effort of 7.19 seconds in the 55-meter dash, a time that currently ranks her No. 15 in the country.  Moore, a sixth-place finisher at last year’s CIAC Open Championship, was .29 of a second ahead of runner-up, Michaela Pernell of Nonnewaug.

In the 3,000m, Wilbur Cross junior Danae Rivers (see above photo) coasted to an easy victory with her time of 10:57.21. Bradford junior Cyrene Nicholas was second at 11:16.43. Nonnewaug sophomore Mae Mathews placed first in the high jump with a leap of 5-2.

The boys’ competition featured a 14-foot clearance from Danbury senior Leland Roberts in the pole vault.  This was Robert’s first time over 14 feet since his sophomore year when he was State Open champion. He has been “working on finishing his jumps at the top” and feels confident better jumps are in the future.  Amity sophomore Kyle Beaudette dipped under nine minutes for the 3K with a first-place time of 8:56.50, which ranks him No. 7 nationally.

Gabby Curtis of Wilbur Cross was able to defeat the State Open 300IH champion Jaliyah White of Hillhouse over the shorter indoor 55HH distance 8.85 to 9.16.  Shawn Fletcher continues to dominate the boys’ hurdles in Connecticut, winning 7.88 to Aaron Rattley of Amity’s 8.18.  This marks Fletcher’s 4th race under 7.9 with no one else in Connecticut under 8 seconds.

Finally, Alyssa Case led a 1-2-3 sweep for Branford with a 9-6 height in the girls’ pole vault.

Next up at Moore Field House in New Haven will be this Friday’s Alpha Owl Invitational.